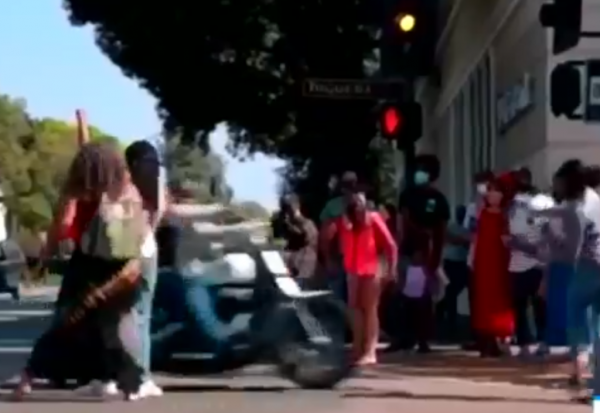 San Luis Obispo police officers are asking the public to help in their investigation of an incident between protesters and a motorcyclist on Sept. 2. Both sides blame the other, while evidence of the incident is limited.

At approximately 3:37 pm, protesters were in the intersection of Osos and Higuera streets when it appears, based on a short video, that the motorcyclist turned left into a lane where several protesters were standing. The motorcycle drives into the protesters, who were uninjured.

The motorcyclist then drove to the police station to file a report that the protesters had almost knocked him off his motorcycle. The protester later filed a report of assault with a deadly weapon.

A small portion of a video tape, that was provided to the Tribune, was viewed by police. Investigators have spoken with protesters and the motorcyclist, who appear to have differing accounts of the altercation.

In the Tribune article, a reporter appears to rely on demonstrators’ accounts of the incident: Two protesters were crossing the road when the motorcyclist drove into them even though multiple empty lanes were available. In addition, the reporter writes that officers viewed multiple tapes of the incident.

The Tribune video does not show the other vehicle lane on Hiquera Street (which there is only one), or evidence the protesters were crossing the street at the time of the incident.

The motorcyclist retired seven years ago from a career in the U.S. Army, according to a family member who asked not to be identified because of fear of retaliation. As a combat soldier, he was sent to Iraq multiple times.

In contrast with the demonstrators, his family contends the protesters were blocking traffic as they verbally assaulted drivers, that there were protesters blocking the other lane, and that the motorcyclist was attempting to drive away because the protesters intimidated him.

Also rebutting the Tribune article, a SLO Police Department’s request for information notes that they had been provided only one video of the incident, even though there were multiple people recording at the time.

“Through the Police Departments’ investigation, there have been numerous witnesses interviewed and one video recording of the incident was provided,” according to police. “Upon review of this recording, numerous people are seen recording the event as it unfolded. If you have video of the incident or were an eyewitness please contact Detective Stradley at 805-594-8068 or video can be emailed to estradley@slocity.org.”

For more than a month, protesters have demanded charges be dropped against BLM organizer Tianna Arata, 20, and protester Elias Bautista, 22. Both were arrested after a group of protesters blocked Highway 101 for almost an hour.

While several witnesses claim protesters were chasing cars, hitting cars with objects and in one incident breaking a car window, the protester blame the drivers, who they say pulled into them.

Protesters have vowed the community will get no peace unle