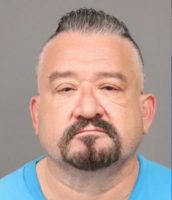 Shortly after 11 a.m., a man called 911 to report a person in the vehicle behind him was pretending to be a police officer and trying to pull him over. Officers then stopped Edward Hermosillo near the intersection of Tank Farm Road and Broad Street.

Hermosillo was driving a black 2011 Dodge Charger equipped with a police-style push bumper and lighting which was inset in the grille, making the car look like a police vehicle. Officers found two illegal collapsible batons, a police-style tactical vest and a holster inside the vehicle.

Officers arrested Hermosillo on suspicion of impersonating a peace officer and possession of a collapsible baton and booked him into the San Luis Obispo County Jail.

Inspectors suspect Hermosillo may have impersonated an officer on other occasions. Officers are asking anyone who has information or believes they may have been a victim of a similar crime committed by Hermosillo to call the SLO Police Department at (805) 781-7312.