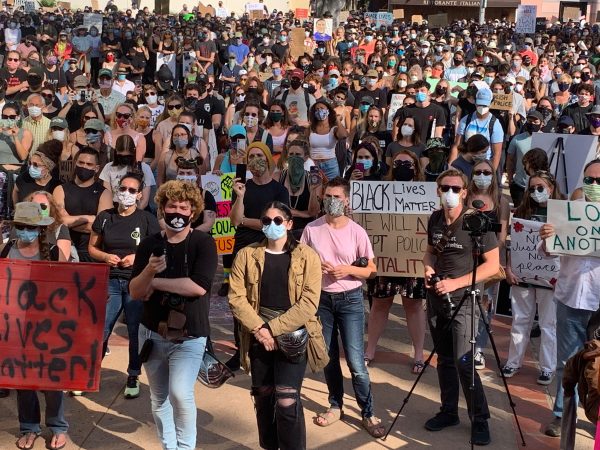 Boy, lots of BLM stuff going on! I just read Andy Caldwell’s commentary and of course that of Chris Arend. They reflect a lot of local San Luis Obispo County and national mentality. I would like to speak for the other side, those on the side of Law and Order, Peace and Justice.

“Law and Order” you say!, ‘I thought you were one of those bleeding heart commie liberals that we on the right love to berate’. I did, and I am. I would rather be a bleeding heart liberal than a cold hearted, ignorant right wing conservative. My core values, I choose justice over self serving dogma.

Yes, I said Law and Order for that is precisely what BLM and other movements for justice seek. They seek to overthrow the ill gotten power and oppression of the rich and entitled and restore balance and fairness to this nation.

Is it lawful, fair and just for a person of power to brutalize someone of less power? Is it fair to crush the safety, equal treatment by the justice system, livelihood, housing, medical care, access to human services and all else this country has to offer in the name of racism? Is it legal to deny any of human dignity and equal opportunity? Read the constitution, look into your heart.

Can we have any “order’ in our land if many are subjected to denigrating restrictions? All that BLM, Occupy and other movements seek is a balance of power and access to all that this bountiful nation has and should distribute to all its residents equally. We are shamefully far from that objective so the work will go on until we are done. Those of you who can only whine “Law and Order” when your little life is upset by protestors trying to make a point ought to get down there and join in.

We do not have Law and Order when we fear the police, cannot share the same drinking fountain, gain access to fair housing and medical services. We do not have it when communities of color or low income bear the burden of pollution and neglect. Yeah, this is about poor whites too.

I hope to reach those with little or no knowledge or experience with Law and Order and justice in our society. All the entitled white folks, most of whom are not Jewish (all that describes me), have enjoyed opportunities untarnished with hate, oppressive laws, restrictions, and neglect. We have had no reason to be concerned with such things. But justice denied anywhere makes us all less free. All the armchair posturing in the media and posts by those with no credible information is appalling.

I have been an avid follower of U.S. politics since around 1963 when young northerners (many who were Jewish) headed to our southern states to enable voter registration by the disenfranchised (mostly blacks). Some lost their lives in that effort. What were you doing to support fair and equal access to that most basic American right, the right to vote?

Andy and Chris supposedly support Martin Luther King’s peaceful agitation (to make us aware how benevolent they are) while ignoring the fact those events so many years ago were awkward, inconvenient and made a lot of people mad. The FBI Director illegally investigated MLK as a commie agitator and kept a huge file on him, ignoring the murderers in the South who killed civil rights workers. And when MLK was particularly peaceful none of the ‘powers’ paid any attention. It was only when he got in the face of whitey and insisted on being heard did anything change-and that took years, and created much anger (just like with And and Chris over our local BLM activities) and even then not enough progress was made. Look at the intervening years since he was murdered (1968)- all the discontent, the neglect, the riots out of frustration.

About our local BLM movement and affairs attributed to it. I was an early participant in the marches, less later on. I support them, but do not agree with all the reported events and strategy. I do not support stomping on the flag or screaming at passers by. But I can sure understand the frustration and rage that leads to such efforts.

Even now, 2020, we have a long way to go and what in the hell is wrong with this nation? Why have we not cleaned up this mess decades or 100 years ago?

Those protestors take their time and other resources to try to get some attention to a cancer in our society that most would rather not look at, and we must. Sitting quietly in the park with some signs appealing for justice won’t do anything, they know it-and so do you! Creating change is often messy, awkward and sometimes illegal (since those in power make it so). Hitler rose to power by slowly enabling all his rantings and cruel objectives by creating ‘laws’ to legitimize his efforts.

I have heard some reports that a certain local reporter, who is Jewish, for a prominent news service, was harassed and called a Nazi during his coverage of protests. Wrong, wrong, wrong. Read above where I stated the fact that many Freedom Riders to the South were Jewish.

The ACLU is a bulwark against the forces of evil in this country and is heavily staffed with Jewish lawyers who work like mad for you and me. That historically oppressed group has long been a crucial ally of those who seek justice and freedom. So, BLM people, do not fall into that ditch, do not deride our Jewish citizens. They are your allies (not counting that wormtongue Miller dude who whispers hate and contempt into the ear of trump). Save that hated word/name for those who it fits.

Land of the Free, home of the brave

How about we start acting like that cute phrase we so smugly attribute to our country? Set all people free, be brave in your efforts to achieve that. It is so simple; we in the white majority have benefited from that at the expense of those in the minority (color, money, power-whatever you want to call it).

There is no disputing that, what can be argued is why this and that. Who caused the problem, when, what for, ad infinitum. Let’s focus on fixing the problem, and that is what BLM is trying to do. There might be mistakes and strategies you don’t like. Well, get involved and help guide the movement in the direction you feel is most beneficial.

One huge reason we are in this fix is the vast numbers of politicians (past and present) who have committed crimes- violating their oaths of office. It’s too bad the oaths do not include consequences for those lying bastards.

Want some examples? In one recent event, the impeachment. A large number of Senators stated, before the trial, that they would vote a certain way without regard to any testimony or facts presented. They even voted to deny any testimony from new witnesses. They should all be in jail.

Past politicians voted against the constitution in keeping the poor, people of color, and those without power down and ‘in their place.’ They should all be in jail. Nixon should have spent the rest of his miserable life in jail but because he was a ‘bigshot’ he got off scott free. Trump has pardoned criminals with no right to be free while many thousands languish in prison for the crime of not being his pal. This is not a fair and just society, how long must we wait?

And now dear trolls, crowd on in and vote me into hell.

Pete Evans is a long-time resident of San Luis Obispo.