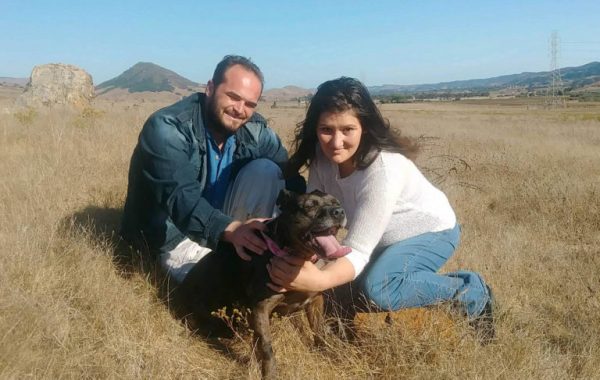 Editor’s Note: This is part two in a two-part series about the consequences of mistaken identities assumptions and the San Luis Obispo Police Department’s efforts to send a couple to prison after officers tried to quietly find then-Police Chief Deanna Cantrell’s pistol, lost in an El Pollo Loco bathroom.

It started in early 2017, when Cole Orndoff identified himself as his brother Cheyne Orndoff during a drug-related arrest. He would later plead guilty to five misdemeanors, including impersonating his brother. In logging Cole Orndoff’s conviction and probation into the county criminal justice information system, it appears that an employee of the SLO County Probation Department wrongly listed Cheyne Orndoff as the guilty party and not the victim.

In mid-2018, Cheyne Orndoff was working as a counselor at Templeton High School but was terminated because of the incorrect information about his “crime” in the county system, he said. Cheyne Orndoff petitioned the court to correct the record to show he was the victim in the case and not on probation, but even though the court confirmed he was not on probation, the Probation Department’s criminal justice information system continued to list him as the offender.

Cheyne Orndoff also reached out to the Pismo Beach Police Department, the agency that had arrested his brother, and asked them to help correct the county’s error. In an attempt to help Cheyne Orndoff, Pismo Beach sent an email to the SLO County Sheriff’s Department explaining he was the victim in the case.

That mistake, and the belief by police that the bearded Cheyne Orndoff was the clean-shaven man who hours earlier picked up Police Chief Deanna Cantrell’s lost pistol, led to his arrest and his children’s placement in foster care.

San Luis Obispo County Sheriff deputies involved at the scene had actual knowledge that Cheyne Orndoff was not on probation. The sheriff’s department had records of the case, as Cole Orndoff spent 56 days in the SLO County Jail for the impersonation and drug charges. In addition, five months prior to the raid, the Pismo Beach Police Department emailed the SLO County Sheriff’s Office reaffirming information that Cheyne Orndoff was the victim, and not the perpetrator.

Shortly before Orndoff was booked into jail, a SLO County Sheriff’s Office watch commander and a deputy chief discussed on a recorded line what happened to Cheyne Orndorff.

Watch commander: While they were out there, I guess one of the detectives were still doing some work on it and they got a better side profile of him and it wasn’t Cheyne. So, basically at this point they don’t know where the gun’s at. So, I asked their captain, are you guys planning on putting some sort of, you know, BOL for local agencies, cause they apparently put this on Facebook at six hours ago, but never bothered telling any of the local agencies. So, he said, yeah, we’ll put something out.

Deputy chief: Had they put on social media that there had been a stolen firearm?

Watch commander: Here’s what they put. If you just go to SLOPD’s regular Facebook page, it says SLOPD is asking for assistance, locating this man who may be in possession of a stolen firearm at El Pollo Loco on LOVR on today’s date at 12:15 and to call SLOPD. So, they put this out at, you know, right when it happened.

Watch Commander: He just has, you know, basically a lost property that is not his, not – I wouldn’t call it stolen.

Deputy chief: But this guy doesn’t have the gun?

Watch commander: No, it’s not Cheyne Orndoff. They had the wrong guy.

Deputy chief: Do they think they have the right guy now?

Watch commander: They don’t know who the right guy is.

Watch commander: So, they went out there. They searched his property They’ve cleared. It’s not him. So, it cleared from that location and they’re like, “yep, it’s not him. We have a better photo now, apparently.” And they now have a side profile and it’s not him.

Deputy Chief: Right. I tell you what, if Cheyne decides he wants to file a complaint against San Luis PD, he’s got a pretty good beef.

Deputy chief: Well, I’m really glad we decided to play it cautious with them because what a surprise, their info wasn’t good.

Watch commander: Well and that’s why I called you. Because I’m like, you know, I’ve dealt with SLOPD enough to know that whatever they’re telling me, only a fraction of it is going to be correct.

Deputy Chief: Because they have a really bad habit of not vetting stuff all the way through.

Cheyne Orndoff and Vanessa Bedroni were booked into the county jail on a Wednesday, and by law should have had their arraignments by Friday. However, their rights were violated; they were kept in jail until their arraignments on Monday July 15, 2019, according to court records.

While the couple was still in jail, SLO Police Detective Suzie Walsh attempted to pressure the SLO County District Attorney’s Office to file the cases as felonies.

“I’d like to make sure this case gets filed as a felony and I’m concerned that arraignment is approaching quickly,” Walsh wrote in a July 12, 2019, email to Deputy District Attorney Greg Devitt. “Please accept my apologies if I’ve been misinformed and the case has already been filed as a felony.”

Devitt responded to Walsh’s request, telling her he had already filed misdemeanor charges against Orndoff and Bedroni, according to court records.

But Walsh was not ready to give up. Walsh contacted a social worker and asked that she call back on her personal line. Those calls appear to have led to a urine test, that came back positive for methamphetamine. But the sample was retested by a private lab and it tested drug free. The SLO Police Department claims they may have mixed up urine samples.

Regardless, the false positive urine sample resulted in the district attorney’s office filing felony child neglect charges against both Orndoff and Bedroni.

At a hearing scheduled for Sept. 24, the court will consider a motion to suppress evidence collected during the warrantless search, filed by Bedroni’s attorney Peter Depew.

Meanwhile, the probation department corrected the law enforcement database, the couple gathered their dog Princess from the pound, the couple’s children remain in county custody and the police chief resigned her position after getting a job at the Bay Area city of Fairfield.