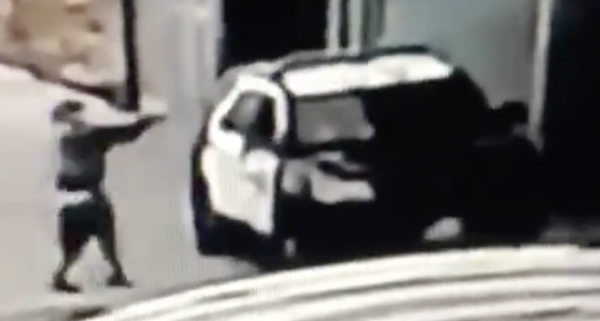 Authorities are searching for a male suspect who ambushed, shot and severely wounded two Los Angeles County Sheriff’s deputies outside a Metro station in Compton Saturday evening, a near fatal incident that kicked off a bizarre chain of overnight events.

Video footage released by the LA County Sheriff’s Department shows a gunman walking up to a patrol SUV, firing shots through the passenger-side window and running away. LA County Sheriff Alex Villanueva said at a press conference Saturday night the shooting was unprovoked.

Update: The gunman walked up on the deputies and opened fire without warning or provocation. pic.twitter.com/cBQjyKkoxJ

“It seems to be part of a growing trend where suspects open fire unprovoked,” Villanueva said.

Villanueva said both deputies suffered multiple gunshot wounds. Both were alert when they arrived at the hospital, where they then underwent surgery.

One of the injured deputies is a 31-year-old woman, who is the mother of a 6-year-old boy. The other deputy is a 24-year-old man, Villanueva said.

The sheriff described the suspect as a dark-skin male.

Saturday night’s shooting prompted a string of events, in which anti-law enforcement protesters arrived at the hospital and allegedly blocked the emergency room entrance, and sheriff’s deputies later tackled and arrested a prominent Los Angeles-area journalist.

With the wounded deputies receiving treatment inside St. Francis Medical Center in Lynwood, a group of protesters gathered outside the hospital and heckled law enforcement. Video shows protesters gathered on the sidewalk in front of the entrance and exit to the emergency room parking lot.

“To the protesters blocking the entrance and exit of the hospital emergency room yelling, ‘We hope they die,’ referring to two LA sheriff’s deputies ambushed today in Compton: do not block emergency entries and exits to the hospital,” the sheriff’s department tweeted. “People’s lives are at stake when ambulances can’t get through.”

During the struggle, a woman later determined to be journalist Josie Huang, ran toward the deputies. Huang ignored repeated commands to stand back as deputies struggled with the protester, interfered with the arrest and did not identify herself as press, the sheriff’s department tweeted. Huang later admitted she did not have proper press credentials on her at the time.

Deputies arrested both the protester and Huang on a resisting or obstructing an officer charge. Huang is a reporter for the Los Angeles NPR station KPCC, as well as for the news publication LAist. She was reporting on the protest outside the hospital at the time of her arrest.

Huang’s arrest prompted outcry and demands for immediate release and an explanation as to why deputies arrested a journalist. Early Sunday morning, Huang tweeted that she had been released from county jail.

Huang had been covering the anti-sheriff’s department protests in South LA as recently as Saturday afternoon.

President Donald Trump weighed in on the events in Los Angels County, retweeting the video of the shooting and stating, “Animals that must be hit hard!”

“If they die, fast trial death penalty for the killer. Only way to stop this!” Trump tweeted.

Trump also retweeted the sheriff’s department command for protesters to stop blocking the entrance and exit to the hospital.