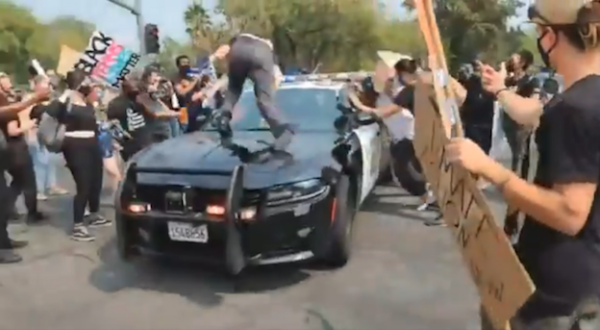 During a protest against President Donald Trump in Sacramento County on Tuesday, two activists left the demonstration in ambulances following separate incidents involving vehicles, one of which consisted of an activist falling off the top of a moving CHP patrol car.

While on a West Coast trip, Trump flew into Sacramento McClellan Airport. Both supporters of the president and anti-Trump protesters gathered Tuesday morning near the airport in the community of McClellan Park.

Confrontations between the two sides occurred, but initially, no violence broke out.

Anti-Trump protesters then marched through the streets of McClellan Park. During the march, at least three collisions between vehicles and protesters occurred.

First, a Volvo station wagon collided with demonstrators. A window of the Volvo was smashed, and one protester was taken away in an ambulance following the incident.

Then, a Ford pickup truck drove through a crowd of demonstrators in the middle of the street. Protesters kicked the truck and appeared to jump on the side or back of the vehicle. It is unclear whether anyone suffered injuries.

Later, a group of protesters surrounded a CHP cruiser in an intersection. One protester jumped on top of the hood of the CHP vehicle. He then crawled onto the roof of the car as the officer was beginning to drive away.

As the officer drove away, the protester fell off the vehicle, landed on the street and suffered injuries. An ambulance transported the injured protester to the hospital.

The extent of the protesters’ injuries is unclear.

In Sacramento, CA outside a Trump event – somebody jumped on the hood of a police cruiser and they are now claiming that the police “ran him over”
Video here: https://t.co/9IJ1ktqh3A pic.twitter.com/tgGRFr0IoO