Outgoing San Luis Obispo Police Chief Deanna Cantrell has not yet begun her job as the top cop of Fairfield, and city council members are already calling into question her record, specifically voicing concerns over the chief’s actions after she left her gun in a restaurant bathroom.

Cantrell has served as the city of SLO’s police chief since Jan. 2016. Last month, Cantrell announced she would be departing San Luis Obispo for the chief position at the Fairfield Police Department.

During a Sept. 15 Fairfield City Council meeting, two councilwomen raised concerns about Cantrell. Vice Mayor Pam Bertani and Councilwoman Catherine Moy then gave interviews to the Daily Republic in which they said they have received a lot of calls from city residents about Cantrell lost her gun and the damage done to a man misidentified as finding the gun.

Moy wants Cantrell to explain how her gun was retrieved and whether police officers may have infringed upon civil rights when they targeted an individual who did not match the description of the suspect.

“My concern is the arrest of a person who did not at all look like the person who they believed took (the gun), and they got him for something else,” Moy told the Daily Republic. “I believe that is a violation of his civil rights.”

At about noon on July 10, 2019, Cantrell left her pistol, a Glock with a 6-round magazine, on a toilet paper holder in the bathroom of El Pollo Loco in San Luis Obispo. A short time later, Cantrell realized she did not have her weapon and returned to the restaurant bathroom. The pistol was not there. 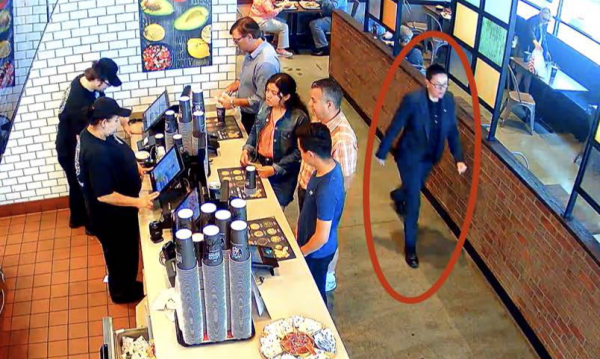 Cantrell then claimed that she immediately reported her gun stolen, but several officers said her attempt to coverup the theft of her gun risked officer safety and led to the search of the home of a man incorrectly identified as the person suspected of taking the chief’s gun.

Typically, after a loaded police firearm is stolen, a be on the lookout (BOLO) is put out to area law enforcement, not only to help quickly recover the stolen weapon, but also to protect officer and public safety.

However, for the first two hours, Cantrell conducted the investigation into her stolen gun without reporting the theft. It would be more than eight hours before a BOLO was issued.

A surveillance video showed a clean shaven man entering the restaurant bathroom after Cantrell left. After receiving a tip that the man in the video resembled Cheyne Orndoff, police descended on Orndoff’s home, even though he looked nothing like the suspect. Orndoff had a full beard and mustache.

Without a warrant, police searched Orndoff’s home, put his daughters, then 7 and 9, in foster care and arrested him for child neglect because of a dirty house and paraphernalia they found in his locked bedroom.

Records, including recordings of phone conversations, show mistakes, assumptions and unwillingness on the part of police to accept they had not found the man who took Cantrell’s pistol. Nonetheless, Orndoff and his wife are still battling felony charges in the case.

In addition to facing scrutiny for her handling of the lost gun incident, Cantrell has received criticism from community members in Fairfield over the July 2020 arrest of SLO protest leader Tianna Arata. One critic accused Cantrell of resisting the social justice movement.

SLOPD officers arrested Arata after she led approximately 300 protesters onto Highway 101, blocking all lanes in both directions for nearly an hour. In one incident on the highway, a protester threw a skateboard at the back window of a car. The window shattered, with pieces landing on a 4-year-old boy, who was unharmed. Protesters claim the driver had hit a protester.

Fairfield Vice Mayor Bertani said the Bay Area city was aware of the gun incident when Cantrell was being interviewed for the police chief position. However, Bertani, as well as Councilwoman Moy, said they were not contacted by city management about their views on Cantrell’s hire.

Mayor Harry Price said he was consulted on the position by City Manager Stefan Chatwin, who hired Cantrell.

Chatwin oversaw a hiring process that included a community panel, a professional panel of police chiefs around the state and a staff panel that interviewed the top candidates. Cantrell was the clear favorite, Chatwin said.

At last week’s council meeting, Chatwin threw his complete support behind Cantrell, going so far as to tie his own job security to Cantrell’s performance as police chief.

Walt Tibbet, former Fairfield police chief and current interim chief, is also credited as being influential in the hiring of Cantrell.

Cantrell began the recruitment process with the city of Fairfield in May 2020, according to the city of SLO. Her final day on the job in San Luis Obispo will be Sept. 30.