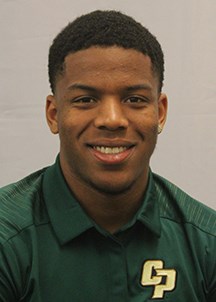 Allegations that Cal Poly quarterback Jalen Hamler was bullying business owners in San Luis Obispo shocked many, but not a former supervisor at the university’s food court.

Samuel Hammond had called university police multiple times to report that the quarterback had stolen items or threatened staff at The Avenue. The ongoing harassment eventually prompted Hammond to find another job, he said.

“It’s a shame that he (Hamler) is the face of Cal Poly’s football team, and he treats the people who feed him like trash,” Hammond said. “Cal Poly should quit brushing this under the rug and address it. Anybody else would have been arrested and had their scholarship pulled.”

After witnessing Hamler putting drinks in his backpack and leaving without paying, the supervisor decided to video record Hamler the next time he came in. On Nov. 30, 2018, Hamler grabbed several drinks that he put into his backpack, paid for a sandwich, but he did not pay for the drinks.

Hamler told a police officer he had forgotten to pay for the drinks, which he put in his backpack because his hands were full. But after watching the video and speaking with staff, the officer classified the incident as attempted petty theft.

“Attempted theft had been met,” the police report says. “(redacted name) wants these incidents handled through the University’s Office of Student Rights and Responsibilities.”

At that time, Hamler had almost $500 on his Cal Poly dining card, according to the police report.

On Jan. 28, 2019, Hamler “mad-dogged” a cashier before asking another football player to “Slap the shit out of him!,” according to a police report of the incident. Staff then reported the ongoing harassment to campus police.

“Everyone in the room started a discussion regarding options when Hamler enters the building: Let a different employee work the cash register and work the back area, walk to/from his vehicle with a co-worker, park in different parking spots or lots, call CPPD if Hamler is being confrontational, having another employee present when Hamler is in The Avenue,” according to a police report.

The 2019 incident, which was not considered criminal, was reported to the University’s Office of Student Rights and Responsibilities and coaching staff.

Hamler did not respond to a request for comment.

“Speaking generally, Cal Poly does not tolerate violations of the student code of conduct and treats all reports of student conduct violations seriously,” Lazier said. “The university investigates all such reports to the fullest extent and, where appropriate, applies relevant sanctions.”

Then on June 1, Arata and Hamler participated in a march that turned violent, with protesters throwing rocks and water bottles at officers.

During one contentious meeting, Hamler allegedly berated a black woman for not being black enough and accused an Asian woman of supporting white supremacy.

On June 13, “some friends and I met with R.A.C.E Matters SLO affiliates Tianna Arata, Michelle Arata, Xavier Moore and Jalen Hamler,” Tricia Hamachai wrote in a statement to the SLO City Council that was read at a June 16 meeting. “Cal Poly football players Xavier Moore and Jalen Hamler aggressively verbally attacked Abrianna Torres, a young black woman, telling her that ‘some black people aren’t black’ and that ‘black is not the color of your skin, it’s a culture.’ “

On July 21, Hamler and approximately 300 protesters marched onto Highway 101, blocking all lanes in both directions for nearly an hour. While on the highway, Hamler and several other protesters blocked a truck transporting a pregnant woman to the hospital.

Arata and another protester were charged with crimes allegedly committed during that protest.