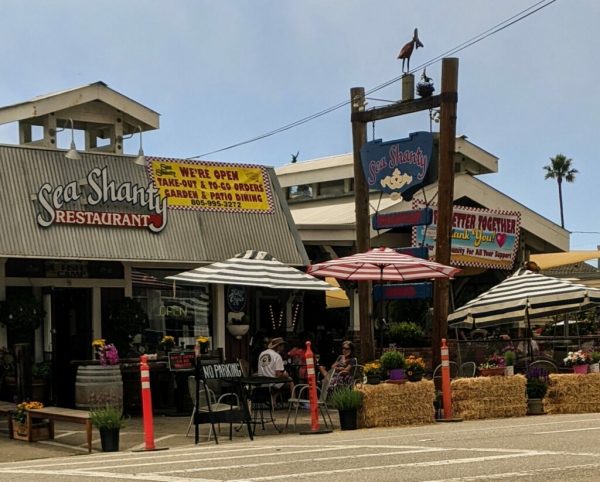 I wandered by Bill Shea’s Sea Shanty diner the other early evening while walking my dog Wilbur and discovered hay bales lining the edge of what were once parking spots, and behind the hay bales and under colorful umbrellas were tables and chairs occupied by diners as cars cruised back and forth past them on Ocean Avenue; passengers no doubt wondering about the hay bales, definitely a new trend in ambiance for alfresco dining.

As Bill began to pull away from the back parking lot in his small SUV with a Notre Dame logo on back (he’s a fanatical ND and LA Ram football fan), I yelled at him, “Are those hay bales there to protect your Valley mess hall customers from leaking out onto the road and getting run over?”

Bill, who laughs a lot, laughed. Then I told him, “I was downtown, and the Heavenly Kitchen (The Hidden Kitchen) has opened their patio in back and they’re killing it and they’re going to run you out of business with their new age cuisine. You’re gonna lose all your meat-eating shit-heels to those girls.”

Bill just laughed. Because Bill isn’t worried. Nothing is going to kill the Sea Shanty as long as Bill’s around. He almost died a few years back, but rallied after spending time recuperating in a care facility.

The Great Recession in 2008 didn’t come close to killing the Shanty and nor will this Great Depression or the pandemic, because Bill Shea knows all the farmers and ranchers and valley-ites and longtime locals, and they love the hay bales and will continue to eat food that “is what it is,” which means it is good, that there is a lot of it and it tastes like food is supposed to taste, and smells like food is supposed to smell.

Bill is not the only restaurateur in Cayucos to improvise outdoor makeshift dining during the coronavirus pandemic. Downtown off the pier, Duckies Chowder House at first placed some picnic tables along the alley beside their take-out window. Then they took over a few parking spots out front with solid barricade blocks and park-like benches enclosing tables and chairs.

On the sidewalk are tables with umbrellas. Then suddenly new picnic tables arrived out front, shaded by beautiful potted tree-size plants. It all appeared so cozy and quaint.

And the people who came appeared so much more content in having a decent area to eat as opposed to the seawall or on the tailgate of an SUV or the bed of a pickup. 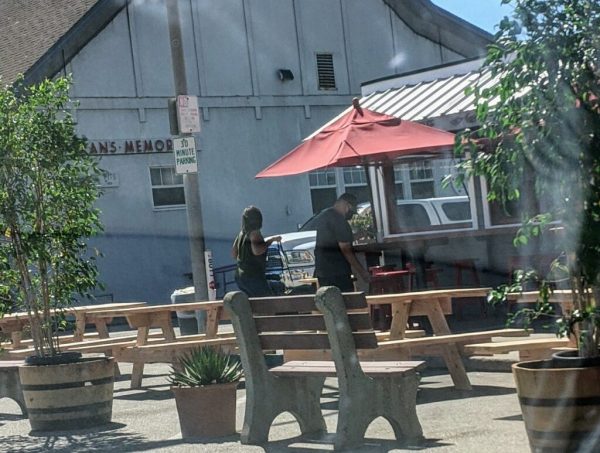 Throughout Cayucos, people who once had to haul take-out all over town—to motels and rentals and residences—can dine comfortably while surrounded by the pleasing sight of hay bales and shoulder-high plants.

Please tell me another town in this county or anywhere that sports the ingenuity of its restaurateurs to think of using hay bales as barricades to ward off bicycle riders, car drivers, teenage skateboarders, begging dogs and stupid drunks aroused by the cloying aromas emanating from kitchens.

“I love the way you’re protecting your hungry hordes with those hay bales,” I told Bill on another day.

Bill just laughed as he walked one of his Labrador dogs in the park beside the Shanty, as he usually possesses at least two dogs, always Labs.

When Bill isn’t riding herd on his employees, he drives around town, feeling things out, and every time I run into him I make sure to insult him as best I can, but I might hold my fire over the pretty plants and flower pots now appearing on the hay bales to brighten things up and contribute even more to the ambiance.

I feel the brainstorm for these fetching plants and flowers, which seem to increase each day, are from Bill’s wife Carol, his partner in business and creator of the best, most sumptuous desserts on the coast, in the county, and perhaps in the state.

There’s no way Bill would think of something as sweetly refreshing as flowers and plants to place on his beloved hay bales, which sooner or later will begin to fray (they’re currently shedding) and could need replacement from the ranchers and farmers inland who eat in his Shanty, which specializes in fish amd chips, among other goodies. And lots of meat. You’d better believe it. No quinoa and birdseed in the Shanty!

Bill, who was once mayor of Cayucos, and usually wins best float during the notorious 4th of July parade, and led his own personal parade in a Model T this year when the event was canceled because of the pandemic, has owned the Sea Shanty over four decades, back in the days when this little necklace of a town was actually more rural; when a lot of cowboys chowed down on the ribs, the burgers, the steaks.

He’s made a few subtle changes over the years, realizing a vegetarian from time to time will venture in, if a bit timidly. His business hasn’t flourished for four decades because he doesn’t know what he is doing.

For instance, at the beginning of the pandemic, when everything was closed and nobody was eating outside, he had an employee delivering food all over town on an electric golf cart. And he’s still delivering.

Business is booming. I asked him the other day if he was going to close down the one-way street beside his establishment and erect more tables with protecting hay bales spiced up with flowers and colorful plants.

He just laughed. I know it sounds outlandish, but I bet if all those chi chi dining palaces in high-end San Luis Obispo, which have stretched their tables and chairs out onto the main drag, secured some hay bales as barricades, topped with flowers and plants, some raucous humor might emerge among serious diners sipping vintage wines and recall the old days when horses shit on Higuera Street.