San Luis Obispo County Sheriff’s Deputy Richard “Ted” Lehnhoff was released from the hospital Sunday, three days after being shot in the leg during a gun battle with a wanted felon in Templeton.

Following the deputy’s release from the hospital, a caravan of sheriff’s vehicles escorted a red vehicle carrying Lehnhoff on Highway 101. Crowds of supporters cheered from overpasses along the procession route.

“Welcome home Ted! It’s good to have you back! And thank you San Luis Obispo County for all your heartfelt support!” the sheriff’s office stated in a Facebook post accompanying a video clip of the procession.

On Thursday morning, Chris Straub, whom authorities say belonged to a white supremacist gang, fled by foot from deputies who attempted to detain him. Straub, 38, ambushed deputies, firing multiple rounds from a handgun and striking Lehnhoff once in the leg.

Shortly afterwards, deputies shot and killed Straub as he was trying to enter his vehicle, which contained loaded firearms. A CHP helicopter airlifted Lehnhoff to a local hospital. 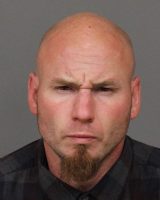 Acquaintances of Straub suspect his death was a suicide by cop. In the day leading up to the firefight, Straub had broken up with his girlfriend and was experiencing car trouble, acquaintances of his told CalCoastNews.

Sheriff Ian Parkinson said Straub knew he was potentially going to prison and did not want to and had made statements indicating he intended to get into a shootout with law enforcement. An investigation into the incident is ongoing.