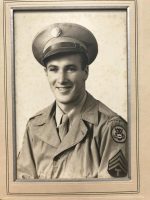 Atascadero police officers located letters written by a soldier during World War II lying among allegedly stolen property, then tracked down the children of the deceased veteran and returned to them the family heirlooms.

In September, officers arrived at the storage unit of an individual suspected of possessing stolen property. Officers placed the suspect under arrest, according to the Atascadero Police Department.

Among the stolen items, officers found a box containing several old photographs and letters written by a soldier who had served in the United States Army during World War II. Officers seized the letters after the suspect was unable to explain  explain where or when he came in possession of them.

Officer Kristian Wood, also an Army veteran, conducted investigative research and learned the letters belonged to the family of John Lucas Sr., who served in the 144th Infantry Regiment. The letters had been written between 1940 and 1945 and were sent to Lucas’s wife, Henrietta, and son, John Jr., who were living in San Luis Obispo at the time.

Wood then managed to obtain contact information from the online veteran community, which placed the officer in connection with San Luis Obispo resident Lawrence Lucas, who was believed to be the son of John and Henrietta Lucas. Wood contacted Lawrence Lucas and confirmed he was their son.

Lawrence Lucas confirmed John Sr., Henrietta and John Lucas Jr. were all deceased. He was unaware of the letters his father wrote during World War II.

Wood arranged to meet with Lawrence Lucas, as well as his sister, Teresa, in San Luis Obispo. The Atascadero officer brought them the letters.

The two siblings were amazed to learn the letters existed and had no idea how they left the control of their family, police said.

“With recognition and thanks to Officer Kristian Wood for his dedication, diligence and follow-through, the Atascadero Police Department is extremely happy to have been instrumental in returning these historical family letters and heirlooms to their rightful owners,” the police department stated in a news release.