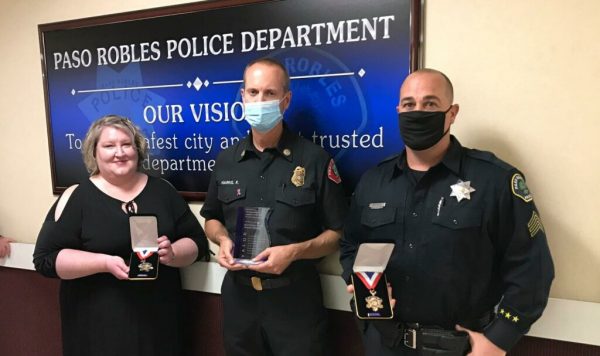 In the early morning hours of June 10, McKinley, the only dispatcher on duty, noticed a person standing outside the police department with a firearm. She alerted officers and then had the forethought to notify firefighters who were headed back to the station, advising them to stay away from the Public Safety Center.

Even though she was rattled by the attack on the station, she kept her composure and tracked the shooter on surveillance cameras. She is credited with saving the lives of the firefighters.

As officers and deputies attempted to find a way to safely rescue Dreyfus, a white truck was spotted approaching the location of the downed officer. Unbeknownst to anyone, the driver of the truck was Sgt. Lehr, who was answering the call for help.

Lehr later recalled hearing gunshots coming from his directions as he drove south on Riverside Avenue towards the wounded deputy. Lehr continued through the sounds of gunfire, to Dreyfus.

Wearing only sweatpants, sandals and a T-shift, Lehr selflessly jumped into action to save Dreyfus. As a U.S. Marine, Lehr never contemplated his own safety. Lehr removed his own shirt and immediately applied pressure to Dreyfus’ wound.

Simultaneously, while in the area and scanning the police department radio traffic, Chief Harris jumped into action. With an ambulance and fire engine staged for deployment at the fairgrounds, Harris planned an extraction.

Without regard for his own safety, Harris drove his SUV into the unsecured area, where he and Lehr placed Dreyfus into the SUV. At that time, they did not know where the shooter was.

“Harris’ heroic, selfless, actions allowed him to get Deputy Dreyfus to safety, where life-saving medical attention could be obtained,” according to the police department’s Facebook page.