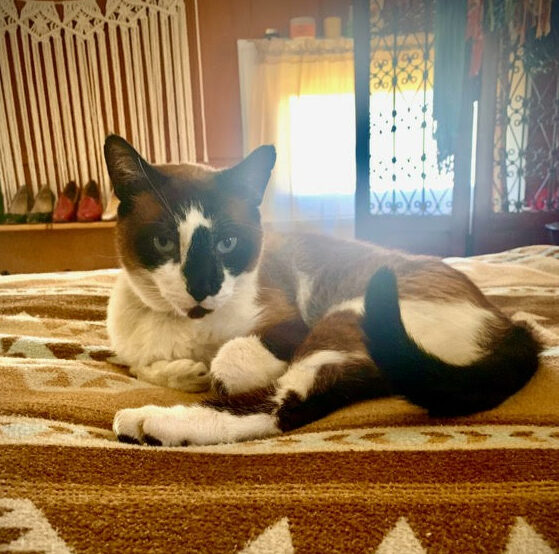 When San Luis Obispo resident Kelly Anderson lost her cat Maulks in late August, she never thought she’d have to fight to get her beloved cat back.

Anderson was surprised at the community support she received after her 13-year-old three-legged cat failed to come home. She placed missing cat signs around town and posted a plea on Nextdoor for neighbors to help her find her cat.

“Even strangers have reached out to help,” Anderson said. “It is very encouraging.”

On Saturday, SLO City Council candidate James Papp said he knew where the cat was, but did not disclose the location.

Maulks has always lived as an indoor and outdoor cat, often wandering around its downtown neighborhood. On several occasions, Anderson has retrieved her cat from Papp’s place.

Papp said his door was open, the cat walked in, and he fed Maulks.

During the past three days, Papp and Anderson have gone back and forth on Nextdoor, with Papp insisting the cat is happy in its new home, and Anderson pleading for him to tell her where her cat is located.

Papp argues that when you allow a cat to wander outside, you have a reasonable expectation it will not be coming back. He also questions if anyone can truly own a cat.

Anderson: “Why wouldn’t you tell me where or give them my info so I can get him back? You know I’ve been worried and trying to find him. This message makes me upset. As if your the one to decide whats best. Can you please give me their info.”

Papp: “The person who had Maulks is themself very upset. Someone told me not to get involved because everyone would be upset at me, but I wanted you to know he is safe.”

Anderson: “Why would they be upset? It is not their cat. Why would you tell me you know where he is, but won’t tell me? I have been searching for over a month. Called animal services multiple times. Filed reports. Fliers. Gone door to door. And your telling me that what these people are doing is ok. You are supporting theft. Aren’t you running for city council? Aren’t you supposed to help the people of this city?”

Papp argues that it is not reasonable to let cats wander, and that if she loved the cat, she would keep it indoors.

“It is now an indoor cat, and it is happy,” Papp said. “The cat has three legs because it is allowed to wander.”

Papp claims Anderson has left the cat unattended when she leaves town for work, showing she does not love the cat.

“If she loves this animal, she would not let it wander,” Papp said. “It is not my business. This is taking away from city issues such as homelessness and climate change.”

Anderson says Papp does not know her, and that when she works out of town, she hires a cat sitter.

Anderson is hoping to be reunited with Maulks, and has filed a police report.