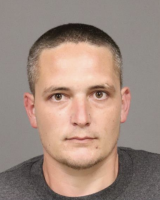 At about 9 p.m., officers arrived at a local hospital in response to a report of possible elder abuse, according to the San Luis Obispo Police Department. An ambulance had transported the grandmother of David Mazza Jr., 33, to the hospital after she suffered undisclosed injuries.

Hospital staff determined, based on the elderly woman’s injuries and mental state, she was unable to care for herself. Mazza was at the hospital and told staffers he was his grandmother’s primary caregiver. Mazza demanded that his grandmother be released from the hospital, police said.

Police detectives then came to the hospital because of the severity of the elderly woman’s injuries, police said.

Mazza has been his grandmother’s caregiver for approximately 10 years and has been reported to SLO County Adult Protective Services on several occasions, according to police.

Investigators determined Mazza was not properly caring for his grandmother, and officers arrested him for elder abuse. Officers booked Mazza in SLO County Jail with his bail set at $50,000. Mazza is not currently in custody, according to the county sheriff’s office website.

Police are not releasing additional information about the case because of the sensitivity of the investigation. Investigators will continue to work with Adult Protective Services to ensure the elderly woman receives proper care.