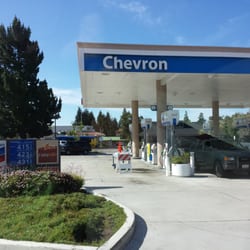 Police say a 39-year-old man who was found dead inside a vehicle at a San Luis Obispo gas station last week likely died of a drug overdose. [KSBY]

At about 5 a.m. Friday, callers reported a body at the Chevron gas station located at the intersection of Santa Rosa Street and Foothill Boulevard. San Luis Obispo police officers and the SLO County coroner’s unit then began investigating the death.

Police say foul play is not suspected in the case. Rather, officers found drug paraphernalia inside the vehicle, and it appears the man died of an overdose, according to the police department.

The deceased man was one of three bodies found in a span of two days last week in SLO County.

Shortly before noon on Thursday, officers found the body of a homeless man in a tent located along the Bob Jones Trail between Prado Road and Los Osos Valley Road in San Luis Obispo. Early Saturday morning, officers found Daniel Jay Romo, 26, dead in a riverbed near JCPennys in Paso Robles.

Investigations into each of the three deaths are ongoing.