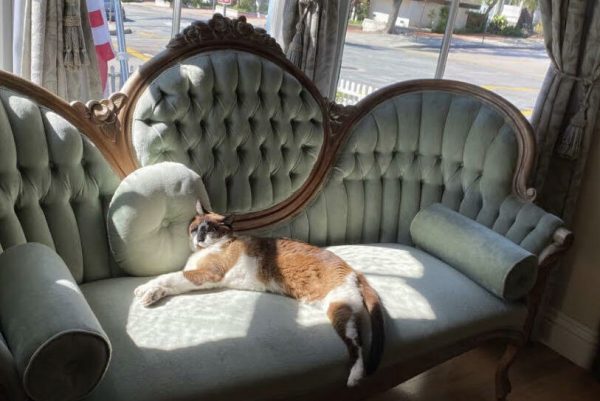 Maulks the cat was reunited with her owner today, after a good Samaritan spotted the cat walking on a fence in downtown San Luis Obispo.

The good Samaritan picked up Maulks and took him home. She then contacted Kelly Anderson, who had previously given her a flier, and invited her to pick up her cat.

Anderson and the cat are back at home. She plans to keep Maulks inside until she can get him chipped and acclimated.

In late August, Anderson’s 13-year-old three-legged cat failed to come home. She placed missing cat signs around town and posted a plea on Nextdoor for neighbors to help her find Maulks.

Last Saturday, SLO City Council candidate James Papp said he knew where the cat was, but refused to disclose the location, igniting public outrage. Papp argued that it is not reasonable to let cats wander, and that if she loved the cat, she would keep it indoors.

Maulks, however, has always lived as an indoor and outdoor cat, often wandering around its downtown neighborhood.

“I feel relieved this is over and I have my cat back,” Anderson said. “Even though this caused a big storm, he was returned.”