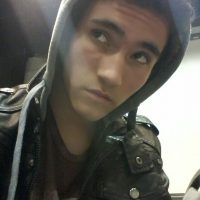 CHP officers arrested an Atascadero man Friday who allegedly smashed a car window onto a 4-year-old boy during a protest in San Luis Obispo on July 21. Prosecutors have charged eight protesters for a variety of alleged criminal acts during that Black Lives Matter protest.

Officers booked 21-year-old Robert “Tony” Lastra into the San Luis Obispo County Jail on a felony charge of vandalism and a misdemeanor charge of false imprisonment. Lastra was then released on zero bail.

Shortly after 5 p.m. on July 21, approximately 300 protesters marched onto Highway 101, blocking all lanes in both directions for nearly an hour. While on the freeway, protesters encircled a motorist who was attempting to drive around the protestors.

Glass shattered on the 4-year-old boy who was sitting in the back seat. 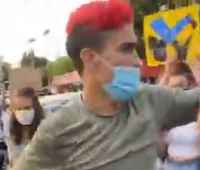 Protesters claim the car hit Grocott as the driver attempted to drive away, tossing Grocott on the hood of the car prompting Lastra to break the back window of the vehicle.

Earlier on Friday, prosecutors filed four misdemeanor charges against Marcus Montgomery, 24, including false imprisonment, obstructing the free movement of any person in a public place, and resisting or delaying a police officer. Also, Joshua Powell, 23, is charged with obstructing or delaying an officer and Amman Asfaw, 22, is charged with  false imprisonment.

Tianna Arata, one of the protest organizers, is charged with one count of unlawful assembly, one count of disturbing the peace, six counts of obstruction of a thoroughfare, and five counts of false imprisonment.

During Arata’s arrest, Elias Bautista yelled at an officer before kicking him in the crotch. Prosecutors charged Bautista with one felony count of resisting an executive officer by force or violence and two misdemeanor counts of resisting, obstructing, or delaying a peace officer for his acts committed against three individual peace officers.

Following Friday’s filings, multiple supporters of the protesters accused the SLO County District Attorney’s Office of racism because four of the eight people charged are black.

District Attorney Dan Dow said that the color of a person’s skin had nothing to do with the charges filed.

“We don’t file based on age, gender or race,” Dow said. “We look at the evidence.”

On Sept. 17, Arata’s attorney Patrick Fisher filed a motion to have her charges dismissed, asserting her actions are protected under the First Amendment and that she is a victim of targeting. The motion also questioned why Arata was the only person charged when approximately 300 people participated in the march onto the highway.

In a response filed on Oct. 20, the district attorney argues freedom to protest does not permit the protesters to infringe on the rights of others. In addition, the filing notes that prosecutors have video evidence of 12 of the 13 charges filed against Arata.

“Freedom of speech through lawful protest is a fundamental right in our Constitution, but that speech or protest cannot stand when it violates the laws, and liberty of others through unlawful assembly, detention, obstruction and harassment of others,” according to the pleading. “We remain sworn and committed to not let bias, sympathy, prejudice, or public opinion influence our assessment of the evidence.”