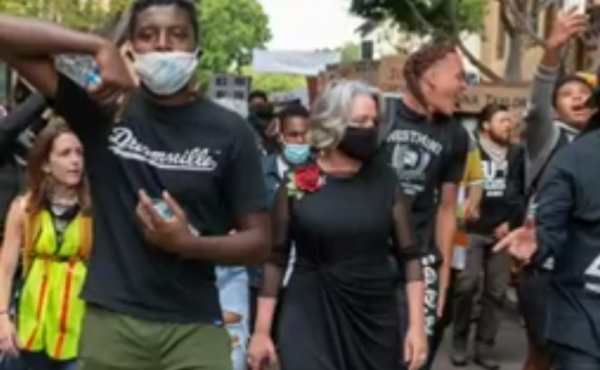 In a scathing letter to District Attorney Dan Dow, San Luis Obispo Mayor Heidi Harmon accuses the county’s top prosecutor of voter suppression based on her belief Dow filed charges against a man, not because he violated the law, but because he supports her campaign.

“Arresting people who are campaigning for your political opponents is a well recognized form of voter suppression,” Harmon writes in her letter. “And Dan Dow knows his political playbook.”

Following the death of George Floyd, Harmon and her campaign consultant Quinn Brady began promoting Black Lives Matter protests. On June 21, Harmon joined in a protest organized by Tianna Arrata and Brady, but left to attend a city council meeting before the group entered Highway 101 where they blocked all lanes of traffic in both directions for nearly an hour.

Following the protest, SLO police officers arrested Arata for alleged crimes related to violating the civil rights of others, and Elias Bautista after he kicked an officer in the groin.

On Friday, the District Attorney’s Office filed charges against six additional protesters for a variety of charges, including false imprisonment, obstructing the free movement of any person in a public place, and resisting or delaying a police officer.

In her letter, Harmon accuses Dow of singling out “three Black men—leaders in our communities—from the mostly white crowd.”

Of the six men charged on Friday, three are black. Harmon argues that to make the arrests racially equal, Dow would need to arrest 115 white protesters, according to her letter.

“I am here to say: NO. Not on my watch,” Harmon writes. “Your Jim Crow tactics will not stand here in SLO. And we, the people of SLO, will not stand idle while our young people are being played like pawns for political gain.”

Dow, however, said his office does not consider a person’s skin color when determining whether to file charges.

Harmon also accuses Dow of targeting a protester because he endorsed her campaign.

“Seven days ago, my campaign released a highly watched video of Amman Asfaw endorsing our campaign and urging his fellow students to vote,” Harmon writes. “We published his name again as a member of the City Council appointed DE&I task force just one day before Mr. Dow elected to include Mr. Asfaw in his round-up.”

Harmon is currently running to retain her seat as mayor of San Luis Obispo, a nonpartisan position.

“Our democracy is being called into question.

“Late Thursday night, three Black men were singled out for charges associated with their peaceful participation in the Black Lives Matters protests of this past July. Of the hundreds of people who protested peacefully, the district attorney has singled out these three Black men—leaders in our communities—from the mostly white crowd. These men have worked to bring a voice to our Black and Brown communities of San Luis Obispo. If Dan Dow gets his way, their activism this election will result in a prison sentence.

“D.A. Dan Dow’s actions—to charge these community members for exercising the 1st Amendment—is nothing more than an intimidation tactic; telling our community members that they must be silent or be subject to arrest.

“He is trying to draw attention away from the election, and create civil tension by issuing trumped-up charges against peaceful protesters. But together, we will not allow injustice to prevail.

“The Voters Rights Act of 1965 was meant to end institutionalized Black disfranchisement.

“Today, our county district attorney is using the power of his office to attempt to disenfranchise and silence three men of our town—and by proxy, the entire community these men work to empower through their activism.

“With a single move of unfettered judicial authority, D.A. Dan Dow has indicted .29% of the Black community in SLO City. For context, he would have needed to indict 115 of our white citizens if all things were kept equal at the prosecutor’s office.

“The message Dan Dow is sending to our town is clear: Use your voice to speak truth to power and we’ll put you in prison.

“The timing of these particular indictments isn’t even particularly covert. California ballots just started arriving in SLO at the beginning of the month. The last day to register CA voters online is on the 19th—two days from today. And voting in the CA general election will last for only another 17 days. Seven days ago, my campaign released a highly watched video of Mr. Asfaw endorsing our campaign and urging his fellow students to vote. We published his name again as a member of the City Council appointed DE&I task force just one day before Mr. Dow elected to include Mr. Asfaw in his round-up.

“Arresting people who are campaigning for your political opponents is a well recognized form of voter suppression. And Dan Dow knows his political playbook.

“The D.A. is enforcing the systemic suppression of community activism here in SLO and it sends a message: you are not safe to protest or to vote or to belong—if your skin isn’t white.

“I am here to say: NO. Not on my watch. Your Jim Crow tactics will not stand here in SLO. And we, the people of SLO, will not stand idle while our young people are being played like pawns for political gain.

“If this is political war by proxy, you have picked children as your targets.

“And Mr. District Attorney, you seem to have forgotten something most vital to the obligations of your office: the Constitution. As Justice Kennedy put it in Citizens United, “political speech must prevail against laws that would suppress it by design or inadvertence.” Here your actions are clearly by design. We have constitutional provisions like the First Amendment that protect citizens like Mr. Asfaw, Mr. Montgomery, and Mr. Powell solely because our founders had envisioned ill-intentioned government officials like yourself.

“Mr. Dow, make no mistake—I will stand with our community. I am ready to speak out on their behalf. I swore an oath to this city and unlike you, I will see mine fulfilled. And our Constitution will protect the men you’ve indicted, even as you attempt to undermine the exercise of our democracy.

“I suggest you return our community members to their families immediately and let’s stop using young people as pawns in your political games.”