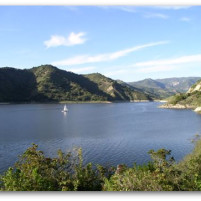 A 39-year-old Grover Beach man drowned in Lopez Lake after attempting to rescue a relative who appeared to be in distress while swimming, according to the San Luis Obispo County Sheriff’s Office.

The county coroner’s unit has identified the victim as David Sanchez.

At approximately 3:40 p.m. Sunday, Sanchez reportedly entered the water at a part of the lake known as the Lopez Arm in order to help a relative who appeared to be in distress. The swimmer managed to make it to safety, but Sanchez went underwater and never reappeared, according to the sheriff’s office.

Shortly after the incident, the sheriff’s dive team began a search for Sanchez. The search resumed on Monday and Tuesday but was hampered by zero visibility conditions in the water.

An autopsy is scheduled for this week to formally determine the cause and manner of Sanchez’s death.