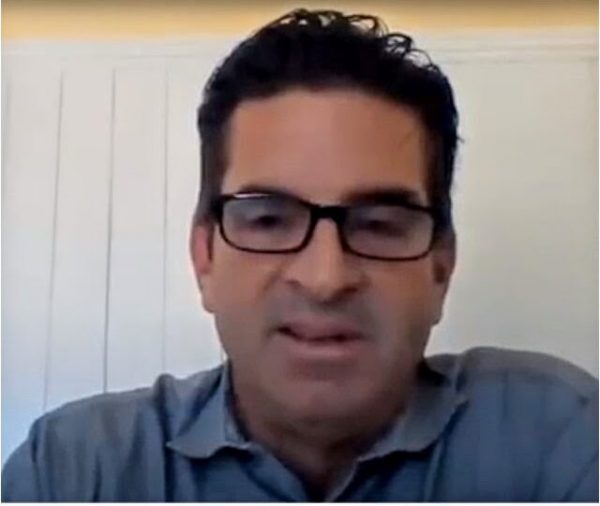 A local government watchdog’s action has led to the loss of $250,000 in grants to the San Simeon Community Services District. The National Fish and Wildlife Foundation and the Ocean Protection Council both rescinded the grants after learning that a member of the board of the community services district had voted in favor of applying for the grant despite a conflict of interest.

Good government advocate Julie Tacker raised the conflict of interest issue over Board Chair Gwen Kellas’ actions to seek the grants which would protect the condominium complex where she lives. In addition, Tacker raised questions about the use of federal grant money for mitigation purposes.

After investigating Tacker’s complaint, both the National Fish and Wildlife Foundation and the Ocean Protection Council rescinded their grants.

“There are needy communities legitimately eligible for these grant monies and San Simeon misrepresented themselves,” Tacker said.

The controversy had its beginnings in 1995 when John Wallace, the administrator for San Simeon’s sanitation plant, directed his private engineering company, The Wallace Group, to repair piping, remove riparian vegetation and place large rocks around the building to protect it from ocean waves. The sanitation plant is located on the coastline south of Hearst Castle.

Neither Wallace nor his company obtained needed permits for the work.

Eventually, Wallace’s unpermitted work caught the eye of the California Coastal Commission. But, in 2019, the commission agreed to retroactively permit the work at the San Simeon sanitation plant.

In the agreement, the San Simeon district agreed to mitigation in exchange for the retroactive permit, which included moving the sanitation plant away from the coastline and restoring the site within 10 years.

In addition to placing the large rock, known as riprap, in front of the sanitation district, Wallace provided riprap protection in front of the condo complex next door. Kellas, the owner of one of the condos, wrote the San Simeon district a letter voicing her support for the riprap work in 2016 after the project came under fire. 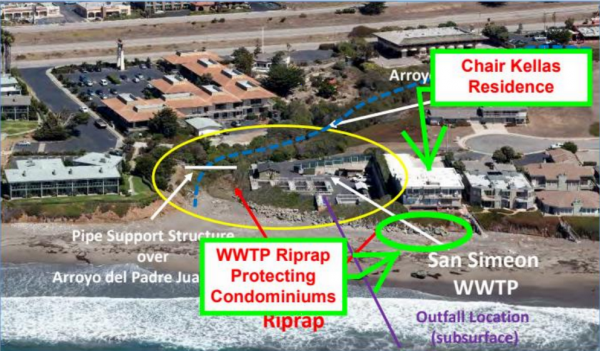 Shortly afterwards, Kellas sought a vacated seat on the San Simeon Community Services District Board. She was appointed to the board in Oct. 2017.

At the time, Kellas asked the Fair Political Practices Commission if she had a conflict of interest regarding voting on the sanitation plant property.  The commission told her in a letter on Nov. 6, 2017, she needed to send a request for a formal written opinion.

However, it would be 19 months before Kellas sent a formal request to the FPPC. During those 19 months, she took parts in board discussions of the rip rap and sewer plant projects and repeatedly voted on issues regarding the riprap and the sewer plant.

On May 8, 2019, as a member of the San Simeon board, Kellas voted to pay Wood Environmental and Infrastructure Solutions $10,500 to write a grant application seeking funding for the restoration of the sewer plant site.

On Aug. 28, 2019, the FPPC replied to Kellas’ formal request for an opinion. The letter noted her significant conflicts and said that she should not participate in discussions or voting related to the existing sanitation plant, or the mediation plans. Kellas did not return requests for comment.

“You state that the waste water treatment plant and riprap has secured the bluff, and you believe its removal will lead to bluff erosion and a structural collapse of your condominium complex,” the FPPC said in its reply. “You have a prohibited financial interest in these decisions.”

In the summer of 2019, San Simeon applied for and received confirmation they would be getting a grant for $125,000 from the National Fish and Wildlife Foundation to clean up and restore the existing sanitation plant site, with a matching $125,000 grant from the Ocean Protection Council.

As part of the process, on July 6, 2020, Charles Grace, the general manager of the San Simeon Community Services District, executed a contract noting how the district planned to spend the grant funds.

To oversee the project, Grace allotted $22,400 to Grace Environmental Services, a waste water consulting and management company owned by Grace. Another $86,600, was slated to go to the grant writer, Wood Environmental and Infrastructure Solutions, all without a competitive bidding process.

California Government Code § 4529.12 requires all architectural and engineering services shall be procured pursuant to a fair, competitive selection process which prohibits governmental agency employees from participating in the selection process when they have a financial or business relationship with any private entity seeking the contract, and the procedure shall require compliance with all laws regarding political contributions, conflicts of interest or unlawful activities.