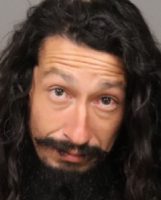 Officers arrested Joel Dominguez, 32, for felony vandalism. Police say it is the fifth time this year Dominguez has been arrested under similar circumstances.

Dominguez is not currently in custody, according to the San Luis Obispo County Sheriff’s Office website.