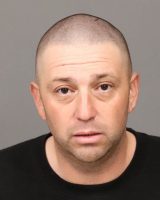 A fight between family members at a Grover Beach home led to an approximately six-hour police standoff on Monday, culminating with the arrest of an allegedly heavily armed man.

First, a 911 caller reported a physical fight at a house in 1000 block of Ritchie Road at about 3:50 p.m. Neighbors also called 911 and reported hearing two gunshots from the house.

Officers arrived at the home and spoke with individuals who fled the house. They said Mark Vigil, Jr., 43, had struck a family member with a firearm, according to the Grover Beach Police Department.

Relatives said Vigil was inside the house and may be armed with an unknown number of weapons. Officers repeatedly tried to contact Vigil, but he refused to speak with them.

The San Luis Obispo Regional SWAT Team and Crisis Negotiation Team came out to the scene.

Officers booked Vigil in SLO County Jail on charges of attempted murder, assault with a deadly weapon and terrorist threats. The sheriff’s office website does not list Vigil as currently being in custody.

Anyone who has more information about the incident is asked to contact Detective Matt Goodman at (805) 473-4502.