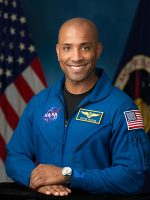 A Cal Poly graduate is expected to pilot a flight to space this weekend.

Victor Glover, a Cal Poly engineering alumnus, will pilot SpaceX’s Crew Dragon spacecraft, which is scheduled to launch Saturday in Cape Canaveral, Florida. The spacecraft will launch on top of SpaceX’s Falcon 9 rocket.

The launch will mark the second crewed SpaceX flight. It will be SpaceX’s first “operational” crewed flight, following a single successful test flight with a crew.

Glover and the three other members of NASA’s SpaceX Crew-1 will travel to the International Space Station, where they are expected to stay for up to six months.

Glover flew 24 missions in support of Operation Iraqi Freedom and earned several Navy medals, including the Global War on Terrorism Service Medal. In 2013, NASA selected Glover as an astronaut while he was serving as a legislative fellow in the United States Senate.