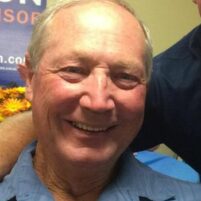 After listening to dozens of community members ask for his resignation while claiming he is racist and homophobic, Cuesta College Board President Peter Sysak on Thursday refused to resign.

Elected in 2014 to the Cuesta College board, Sysak is a Republican who has shared a number of controversial memes on social media. In response to an onslaught of Black Lives Matter protests, Sysmak wrote that we do not have a “police problem, we have a disrespectful criminal thug problem.”

BLM leader Tianna Arata, who is charged with 13 misdemeanors regarding alleged rioting, said during public comment that it is “utterly disgusting” that Sysmak is permitted to remain on the board.

In response to allegations he is a racist, homophobic, Sysmek said, “I will say for the record that I’m a supporter of All Lives Matter; for Black, Latino, Asian, LGBTQ, people of color, the unborn. I’m against discrimination, hate crimes, racist groups. And I’m against defunding the police department and blue lives do matter.”

While the majority of public commenters asked Sysak to resign, he said he would not be bullied.

“These written and verbal attacks have been an assault on my character and integrity,” Sysak said. “I will not be bullied by these attacks.”

In the end, the board voted unanimously to create an internal advisory committee of two members, Mary Strobridge and Patrick Mullen, to investigate the social media posts.

The committee will present their findings at a Dec. 9 meeting.

One Comment about “Cuesta College board president refuses to step down”