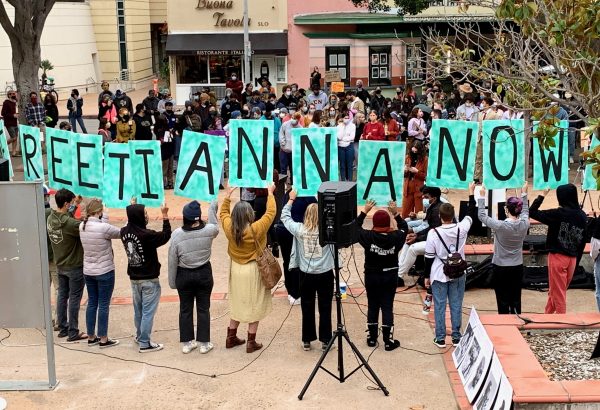 In the latest move in an unusually crude legal battle, attorneys for Black Lives Matter protester Tianna Arata accuse San Luis Obispo County District Attorney Dan Dow of violating his legal duties while attempting to promote his political career, according to a motion filed on Tuesday.

The motion seeks to disqualify the SLO County District Attorney’s Office from the case. If Arata’s attorneys Patrick Fisher and Curtis Briggs are successful, the California Attorney General’s Office will step in and prosecute the case.

In the motion, the attorneys claim Dow’s Christian faith and conservative political leanings motivated him to target their client.

“On Sept. 2, Dan Dow ignored the illegal actions of every White motorist, and filed charges solely against Ms. Arata, under a theory she was responsible for the actions of all of the protesters,” the lawsuit says. “In response, hundreds of members of the public rallied outside the courthouse in support of Ms. Arata.”

Briggs also accuses Dow and his investigator Michael L’Heureux of participating in a criminal conspiracy that includes destroying evidence and filing false police reports, according to Briggs’ declaration.

On July 21, Arata allegedly led approximately 300 protesters onto Highway 101, blocking all lanes in both directions for nearly an hour. While on the highway, protesters ran after vehicles attempting to drive off the freeway, blocked vehicles, and yelled profanities at some of the drivers, according to videos of the protest.

Prosecutors filed 13 misdemeanor charges against Arata: one count of unlawful assembly, one count of disturbing the peace, six counts of obstruction of a thoroughfare, and five counts of false imprisonment.

Shortly after her arrest, Arata and her supporters took to social media with false claims that she was in jail and facing 15 years in prison. Protesters also accused several white drivers of being the aggressors.

Arata was booked and released, but during dozens of protests that followed, her supporters chanted for her release. On social media, protesters asked those who support equality to contact prosecutors and order them to drop the charges or they will get no peace.

On the other side, law enforcement agencies asked the community, through posts on social media, to help identify a protester who threw his skateboard through the back window of a car, shattering glass on a four-year-old boy.

In early October, Arata’s attorneys filed a motion seeking a gag order on both the California Highway Patrol and the San Luis Obispo Police Department, to bar them from talking to the media or posting on social media about the case, along with a motion for a dismissal.

However, San Luis Obispo County Court Judge Mathew Guerrero continued the hearing because of issues with the filings.

Both the CHP and the California Attorney General questioned the timeliness of the motion for a gag order. In addition, Fisher’s motion to dismiss the case was not properly served on the CHP or the city.

Guerrero continued the hearing to Dec. 3, when he is also set to rule on the motion to disqualify the SLO County District Attorney’s Office.