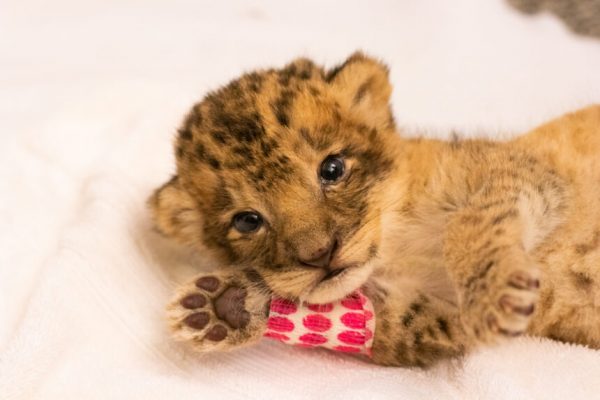 Pauline, a 2-week-old lion cub at the Santa Barbara Zoo, is bouncing back after she became critically ill shortly after her birth.

Born to Felicia and Ralph on Nov. 5, the cub’s health quickly deteriorated. On Nov. 19, zoo keepers removed her from her mother, who was not providing enough milk, and transferred her to a veterinary hospital where she was given fluids.

Pauline’s caregivers are teaching her to drink from a bottle.

“The first month of a lion cub’s life is precarious in terms of survival, particularly when born to a first-time mother,” said Dr. Julie Barnes, the vice president of animal care and health at the zoo. “Felicia is a young first-time mother and this situation that has occurred with her cub is not uncommon with inexperienced mothers.”

Pauline is expected to move back to the zoo’s lion holding area where she can be in close proximity to her parents, but zookeepers will continue to bottle-feed Pauline until she is weaned.