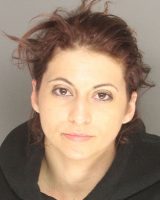 A judge ruled last week that enough evidence exists for a Santa Maria woman to stand trial for the murder of a man whose remains were found on a Nipomo golf course in September. [Tribune]

Kimberly Machleit, 35, is one of three defendants in the case of the 2018 murder of Joseph Martin Govey of Santa Maria. The murder could possibly have a connection to the Aryan Brotherhood.

Detectives believe the suspects murdered and dismembered Govey’s body at a home in Santa Maria before they disposed of it in Nipomo.

A preliminary hearing for Machleit concluded Friday in Santa Maria Superior Court with Judge John McGregor ruling enough evidence exists for the defendant to stand trial for murder, as well as an enhancement for the use of a firearm in the killing. Machleit was the only defendant involved in the preliminary hearing.

On Friday, a witness testified during the hearing that Machleit claimed she killed Govey.

Also, Detective Robert DeBarge testified Machleit said, “They found him,” while sitting in a patrol vehicle with Anderson after their arrests. Machleit also said, “I told them that I did it,” DeBarge testified.

Investigators believe Machleit and others have ties to business affiliated with the Aryan Brotherhood.

Detective Justin DiPinto testified during the hearing that he spoke to another man who told deputies, in late 2018, Anderson asked him to purchase a reciprocating saw. The man also said Anderson borrowed a golf cart from his father, which was kept at a house adjacent to the Blacklake links.

Machleit’s attorneys argued there is no evidence Govey’s death involved a premeditated murder. Likewise, they questioned whether the case belongs in Santa Barbara County because Govey’s remains were found in San Luis Obispo County.

The Santa Maria woman is due back in court on Dec. 3. Anderson and Mersai are scheduled to return to court on Dec. 14, when a judge may set a date for their preliminary hearings.