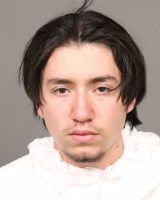 An 18-year-old Fresno man allegedly used a belt to kill Jeanine Vore, 77, in her rural Arroyo Grande home on Friday.

San Luis Obispo County prosecutors have charged Kayonie Eliaz Mendibles with murder and an enhancement for using a deadly weapon, in this case a belt. Mendibles appeared in San Luis Obispo Superior Court Wednesday morning, but did not enter a plea.

At about 5 p.m. Friday, the San Luis Obispo County Sheriff’s Office received reports of a possible trespass at a home in the 2000 block of Chamisal Lane. Upon arriving at the scene, deputies found Vore’s body.

Deputies then issued a “be on the lookout” for Mendibles, who was spotted leaving Vore’s home. About four hours later, deputies arrested Mendibles near the intersection of Fair Oaks Avenue and Halcyon Road and booked him in the San Luis Obispo County Jail.

Authorities have yet to release further details about the case.