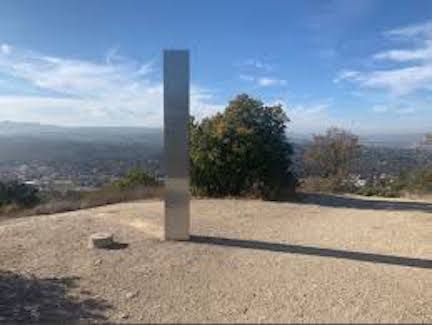 A 10-foot tall monolith was mysteriously returned to Pine Mountain in Atascadero sometime between Friday night and Saturday morning. Locals again flocked to the hiking trail to get a look at the shiny object.

The three-sided, metallic monolith first appeared in Atascadero on Wednesday. the third of its kind to pop up worldwide in recent weeks. Shortly after attracting international attention, the monolith disappeared, apparently after being taken down by vandals.

In recent weeks, similar monoliths appeared in a remote desert location in San Juan County, Utah and on a hill overlooking Piatra Neamt, Romania. Both the monoliths in Utah and Romania have since been covertly removed.

On Wednesday morning, hikers discovered the monolith on Pine Mountain. More hikers then trekked up to also get a look at the monument.

On Wednesday evening, a group of people from out of town videotaped themselves tearing down the monolith while chanting, “Christ is king.” One man then says, “America first.” The group then replaced the monolith with a plywood cross.

The city asked that anyone with information about the monolith or the people who took it call Atascadero Police Department. Shortly afterwards, the monolith was returned.