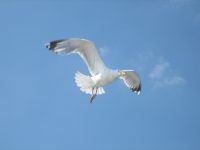 In an effort to protect residents from feces and other nuisances created by seagulls, the Morro Bay City Council adopted a resolution last month allowing a condominium complex to take continued measures aimed at driving away the birds.

On Nov. 17, the Morro Bay council voted to declare seagulls a menace and a danger to public health at Bayshore Village, a condo complex located at 171 Bayshore Drive. The vote, which extends a previous resolution adopted by the council in Dec. 2015, allows the Bayshore Village Homeowners’ Association to haze and harass seagulls; remove seagull nests; and conduct addling of eggs.

The resolution exempts the condominium complex from a municipal code section stating it is unlawful to damage or destroy the nests or eggs of wild birds.

Janet Gould, president of the Bayshore Village HOA, said the homeowners’ association will not hurt or kill the seagulls. The technique that has worked best in the past is addling the seagull eggs, Gould said.

The technique consists of taking eggs from a nest, dipping them in 100 percent corn oil and then returning them to the nest. The process prevents the eggs from hatching and is intended to make seagulls decide the area is uninhabitable.

Seagulls also make their way onto skylights at the complex, which residents try to prevent by placing a wire “X” on top of the lights.