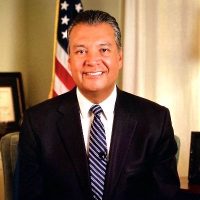 “His appointment will make history,” Newsom said of Padilla in a tweet. “But the Alex Padilla I know is far more interested in changing history — especially for the working men and women of our state and country.”

A son of Mexican immigrants who once worked as a cook and a house cleaner, Padilla previously served as a Los Angeles city councilman and state senator. Padilla has twice been elected as California’s Secretary of State.

Padilla is a longtime friend and supporter of Newsom.

Weber, who represents a district in the San Diego area, was elected to the Assembly in Nov. 2012. She chairs the Assembly Budget Subcommittee on Public Safety and the California Legislative Black Caucus.

Newsom described Weber as a “fearless advocate with unimpeachable integrity and moral clarity.”

“The daughter of sharecroppers from Arkansas, Dr. Weber’s father didn’t get to vote until his 30s and her grandfather never got to vote because he died before the Voting Rights Act passed in 1965,” Newsom said in a statement. “When her family moved to South Central Los Angeles, she saw as a child her parents rearrange furniture in their living room to serve as a local polling site for multiple elections. Now, she’ll be at the helm of California’s elections as the next Secretary of State — defending and expanding the right to vote and serving as the first African American to be California’s chief elections officer.”

It is expected that Newsom will have to appoint a new state attorney general, as well. President-elect Joe Biden has selected California Attorney General Xavier Becerra to serve as secretary of health and human services in his administration. Becerra’s appointment to the Biden administration post requires Senate confirmation.

The amount of appointment power Newsom is currently enjoying is considered to be a first for a California governor in about seven decades or more.