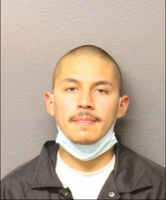 Santa Maria police tracked the gunman who allegedly shot and killed a 20-year-old man last week to a location in Tulare County and arrested him for murder.

On Dec. 18, witnesses heard multiple gunshots in the 800 block of W. Donovan Road at about 4:20 p.m. Officers arrived at the scene and found Kevin Nunez-Escamilla dead of a gunshot wound, according to the northern Santa Barbara County city’s police department.

Detectives tracked the suspect, 20-year-old Jesus Juarez Gracilazo of Santa Maria, to the town of Lindsey in Tulare County. With the assistance of the Tulare County Sheriff’s Department, detectives arrested Gracilazo and transported him back to Santa Maria, where he was booked in jail with his bail set at $2 million.

In an unrelated case, Santa Maria police are asking the public for help in locating a man who, on Nov. 18, allegedly jumped a fence into a victim’s yard in the 400 block of N. Curryer Street. The suspect brandished a gun and demanded the victim follow him. However, the victim did not comply, and the suspect fled the scene on foot, according to the Santa Maria Police Department.

Police describe the suspect as an Hispanic man who is 5 feet 6 inches to 6 feet tall and weighs about 230 pounds. He is described as having facial hair and was last seen wearing a red colored sweatshirt, dark baseball cap and black pants.

Anyone who has information about the suspect is asked to call the police department at (805) 928-3781. 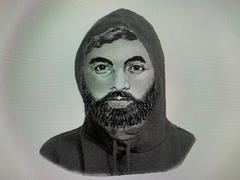 Sketch of the attempted kidnapping suspect