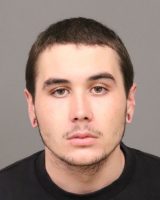 On Dec. 23, officials began to receive a series of reports of thefts that occurred in the Las Tablas Road, Hawley Street and Cayucos Avenue areas in Templeton, according to the sheriff’s office.

Deputies investigated the reports and, at about 10 a.m. Wednesday, contacted Cody Smith, who was on active probation. Deputies found Smith in possession of several items of stolen property.

Investigators arrested Smith and booked him in the San Luis Obispo County Jail on charges of theft, possession of stolen property and prowling. As of Thursday morning, Smith remains in custody with his bail set at $20,000.

Sheriff’s officials are still investigating the Templeton theft cases. Deputies have returned property to some of the victims and are working to identify the owners of the remaining items.

Deputies are asking anyone who has information about the case or who has yet to report a recent theft in the Templeton area to contact the sheriff’s office at (805) 781-4550.