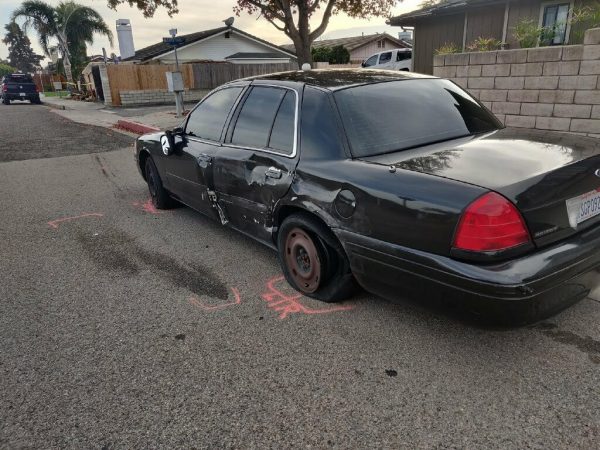 A San Luis Obispo County Sheriff’s deputy sideswiped a parked car before crashing into a tree in Grover Beach on Tuesday.

The deputy was driving on Oak Park Boulevard towards Capistrano Court when he sideswiped a parked Ford Crown Victoria, according to the CHP. The deputy then accelerated, went though the Capistrano Court intersection, veered off the road, crashed through a fence, knocked two patio support beams down and slammed into a palm tree near the intersection of La Jolla Court, said a local business owner who witnessed the accident. The witness asked that his name not be publicized.

The business owner then called 911 while several men ran from their homes to assist the deputy.

One neighbor partially opened the deputy’s door, and told him they were getting help. At first the deputy was dazed, and then began pounding his fist on the steering wheel and yelling, “f**k, f**ck, f**k,” resident Eduardo Cavasos said.

One of the men attempting to assist the deputy told the others that he smelled alcohol on the deputy’s breath, the witness said. A concerned neighbor informed a sheriff’s investigator, who was one of more than a dozen emergency responders on the scene, of their suspicion. The investigator insisted the deputy had not been drinking, according to the neighbor.

Emergency personnel transported the deputy to a hospital before CHP officers took over the investigation. Noting no signs of intoxication, the CHP officers did not request a blood alcohol test, CHP Officer Mike Poelking said.

The investigation is ongoing.