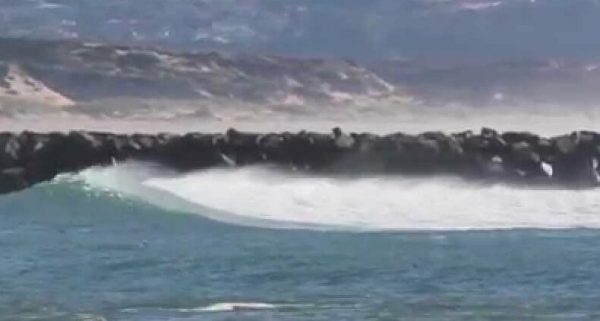 A man is in the hospital after a wave swept him off a jetty on the south side of Morro Bay Monday morning.

At approximately 9:30 a.m., the man was walking along the jetty when the wave knocked him off his feet. The fall left the man with a head injury.

Witnesses discovered the man was unconscious, and called the Morro Bay Harbor Patrol. By the time they arrived, he had regained consciousness. First responders than transported the man to a local hospital.

On, Sunday afternoon, firefighters rescued two, young surfers who were trapped under the Pismo Beach Pier because of the dangerous surf conditions.

A high surf advisory is currently in effect along the San Luis Obispo County coastline. Storms in the Pacific have whipped up 16 to 22 foot waves with local sets of up to 25 feet, according to the National Weather Service.

Rip currents can pull swimmers and surfers out to sea, creating an increased risk of drowning. Large breaking waves can wash people off beaches and rocks, and capsize small boats near shore.