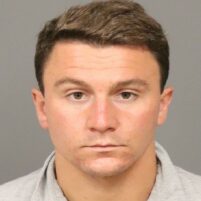 A Morro Bay High School teacher was arrested Monday for allegedly having sex with an underage student and solicitation of a minor.

Investigators are asking anyone who has any information regarding these or further allegations to contact Officer Gene Stuart at (805)772-6225 or San Luis Obispo County Crime Stoppers at (805) 549-STOP.