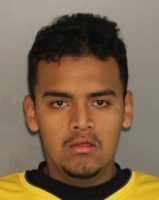 Two Santa Barbara gang members are accused of shooting and killing a pair of 19-year-old college students who were attempting to sell marijuana in Goleta.

Prosecutors have charged the gang members with two counts of murder each over a drug deal that turned into a deadly “robbery rip-off.”

Rastelli died at the scene, and Van Der Meulen succumbed to his injuries three weeks later.

Prosecutors allege Bryan Munoz, 21, and a 15-year-old male defendant committed the double murder for the benefit of, at the direction of or in association with the Westside street gang, which operates in Santa Barbara County. The Santa Barbara County District Attorney’s Office has charged the two defendants separately in adult and juvenile court.

If convicted, Munoz will face the death penalty or life in prison without the possibility of parole. The 15-year-old defendant would be a ward of the court until turning 25.

A third defendant in the case, 24-year-old Joshua Vega, is charged with conspiracy to commit robbery. Vega faces a maximum of five years in state prison.

Deputies arrested each of the defendants, along with another man on a drug sales charge, after serving search warrants at locations in the city of Santa Barbara on Thursday. Then on Friday, authorities seized the alleged getaway vehicle in the double murder, a 2015 black Nissan Altima. Investigators located the car in the Ventura area.

The double murder is one of numerous shootings to occur across Santa Barbara County in what has been a bloody start to 2021.