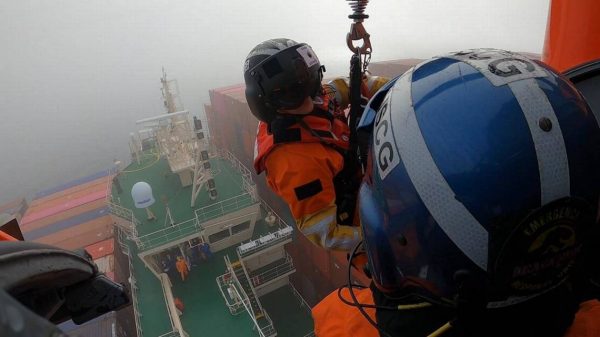 The 27-year-old worker fell 16 feet while aboard the Hyundai Jupiter, a 1,060-foot bulk carrier, according to the Coast Guard. The captain of the ship then contacted the Coast Guard requesting help.

One Coast Guard helicopter from San Francisco, the Mugu MH-65 Dolphin, and another chopper from Sacramento, the C-27J Spartan, then navigated thick fog as they searched for the ship. Upon locating the carrier, the MH-65 Dolphin helicopter crew lowered a rescue swimmer, along with a stretcher.

The rescue crew hosted the injured sailor into the helicopter. The man was then transported to Santa Barbara Cottage Hospital, where he reportedly arrived in stable condition.

The teamwork of the watch standers and the ship allowed for accurate fuel planning and a successful rescue, MH-65 Dolphin co-pilot Lt. Kristin Euchler stated in a Coast Guard news release.