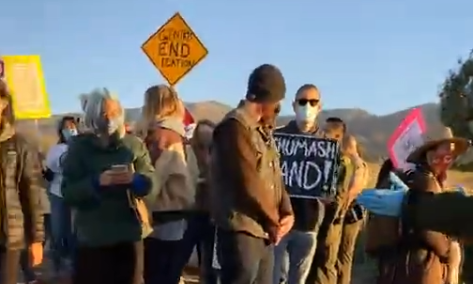 Santa Barbara County Sheriff’s deputies arrested eight protesters on Thursday after they attempted to block construction from starting at an approved residential project located next to the San Marcos Preserve.

Deputies repeatedly informed the protesters that blocking access was illegal and could result in their arrests. Some of the protesters complied with the deputies’ request to stop blocking the entrance to private property, while a group of protesters refused.

Deputies arrested six women and two men, handcuffed them and then booked them into the Santa Barbara County Jail on misdemeanor charges of willfully obstructing the free movement of any person. The protesters were then cited and released.

A man who locked himself to a gate post was also cited for willfully blocking the movement of others, though he was not booked into jail.

In 2005, the Chadmar Group bought 350 acres of land in the foothills between Santa Barbara and Goleta. Of that purchase, the developers donated 300 acres to create the San Marcos Preserve.

Even though 25 acres has already been approved for homes, a group of the protesters wants to buy the property. They are also threatening lawsuits in an attempt to further delay the project.

A post shared by Save the SM Foothills (@savethesanmarcosfoothills)