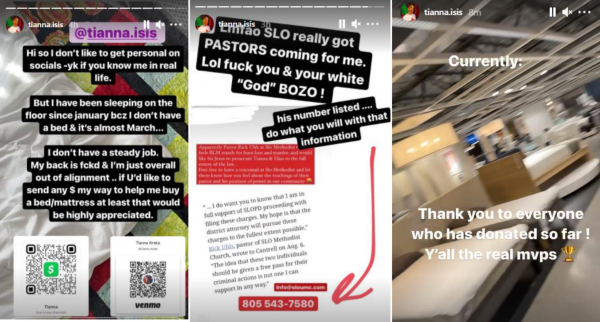 CORRECTION: Judge Rita Federman has taken over the cases from Judge Matt Guerrero.

Attorneys for two San Luis Obispo Black Lives Matter protesters are asking the court to hold prosecutors in contempt of court for allegedly withholding records they were court-ordered to provide.

Attorneys Patrick Fisher and Curtis Briggs, who represent protesters Tianna Arata and Robert Lastra, filed a motion last month asking the court to incarcerate SLO Deputy District Attorney Delaney Henretty and California Deputy Attorney General William Frank for not providing all requested documentation. Fisher and Briggs assert there has to be more correspondence between law enforcement and prosecutors than has been disclosed.

On July 21, Arata led approximately 300 protesters onto Highway 101, blocking drivers trying to exit the freeway. In one incident on the highway, Lastra threw a skateboard at the back window of a car. The window shattered, with pieces landing on a 4-year-old boy, who was unharmed.

On Dec. 11, Judge Matthew Guerrero approved only portions of a motion to compel discovery, noting that the defendants already received most of the discovery they had requested. Judge Guerrero then ordered prosecutors to provide correspondence between law enforcement and prosecutors, and forms reflecting cases referred for prosecution against black defendants over the past 20 years.

Fisher and Briggs also allege prosecutors turned over only 10 of the 13 relevant forms referring BLM cases for prosecution.

In their motion, the attorneys referred to 552 emails sent to the city and prosecutors from Arata’s supporters, and one email from SLO Methodist Church Pastor Rick Uhls supporting the arrest.

For more than five months, Arata has used social media to rally people in support of an attempt to get her charges dropped, to demean those who support her arrest and to raise money.

For example, Arata recently posted a request for a new bed, followed with a post in which she appears to be doxing a local pastor, and then a post of herself in a mattress store in which she thanks her supporters for donating money.

“lmfao SLO really got PASTORS coming for me,” Arata posted on Instagram on Feb. 23. “LOL fuck you & your white God BOZO!”

Arata’s post includes Pastor Uhls’ name and the phone number for the United Methodist Church, which Arata tells her supporters to use how they see fit.

Fisher and Briggs’ contempt of court motion is scheduled for Tuesday morning in SLO County Superior Court. After Judge Guerrero was transferred to family court in January, Judge Rita Federman took over the cases.