The signs around the field of budding cannabis plants growing in rural San Miguel say the grow is part of a legitimate and legal research project. And, neighbors believe the plants are part of a permitted Cal Poly hemp research program. But the grow is not.

The site is not registered with the county. Research hemp farms require a county registration and need to follow county regulations such as not utilizing lights in hoop houses and having at least a 400-acre parcel, said Marc Lea, SLO County’s assistant agricultural commissioner.

It’s not clear whether the cannabis plants are marijuana or hemp.

If they are marijuana plants, the rules are much more strict.

The property owner, Jeannot Nahmias, told CalCoastNews that the cannabis plants growing in hoop houses on his property belong to him. He offered to pay the reporter when she asked about his failure to register the grow.

After he was told that reporters aren’t bought, Nahmias denied he was growing cannabis. He later called back, and then handed the phone to a woman who threatened to take legal action against CalCoastNews, alleging harassment, and then repeated Nahmias’ assertion that there was no cannabis growing on the property.

The 81-acre parcel on Estrella Road in rural Santa Miguel includes multiple vineyards that surround a home as well as the cannabis plants. While neighbors have voiced concerns with the odors from the grow, calls to the county have gone unanswered. Some neighbors have taken the lack of action as proof that the grow is part of a legal research project. 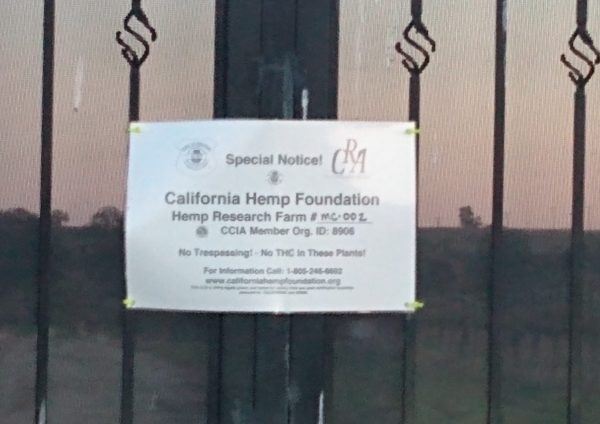 The sign posted at the gate of Nahmias’ property says the property is hemp research through the California Hemp Foundation, which has been suspended by the state of California.

Wayne Richman, operator of California Hemp Foundation, told the San Luis Obispo County Board of Supervisors on June 19, 2018, that hemp growers could operate legally under the umbrella of his foundation. For a fee, growers could sign up with Richman and be able grow without oversight, such as not requiring county testing to check THC content, which is required for hemp.

Both hemp and marijuana are cannabis plants. But hemp has 0.3 percent or less THC, the intoxicant in cannabis, and usually sells for about one-fourth the price. Last year, the hemp market was saturated, with most local industrial hemp growers unable to sell their crop.

“We are the good partners you are looking for to conduct research in your community – a statewide umbrella for research,” Richman said in 2018. “We are set up in fact to be that legal exemption per state law to help the farmers engage in legitimate research. We have been transparent since day one with every government agency.”

Hemp grown in 2018 and 2019 under a legitimate research hemp program was not tested to ensure it was hemp and not marijuana. But that exemption ended a year ago. Even so, there were no hemp grows, including the Estrella Road address, registered with the county agricultural department through Richman’s foundation.