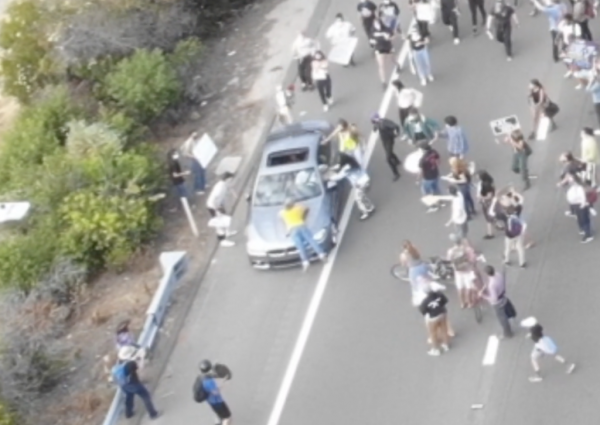 In the latest legal round regarding a group of Black Lives Matter protesters who blocked Highway 101 in San Luis Obispo last summer, the appellate court reversed their earlier decision not to hear an appeal of Judge Matthew Guerrero’s recusal of county prosecutors.

In early January, the attorney general filed two appeals regarding Guerrero’s finding the SLO County District Attorney’s Office had a conflict of interest, one in the felony case against Robert Lastra — the protester who allegedly smashed a car window onto a 4-year-old boy — and one in the misdemeanor filings against the remaining six defendants. Generally, the 2nd District Court of Appeal hears felony appeals, while a panel of three SLO County Superior Court judges rule on misdemeanor appeals.

Lastra’s attorney Brian Ford filed a motion in March arguing his client’s appeal should be moved to the SLO County Court where Judge Guerrero’s coworkers would hear the case. In his request, Ford noted case law regarding a felony that had been dropped to a misdemeanor. But Lastra’s case remained a felony.

Then, without giving the Office of the Attorney General an opportunity to refute Ford’s assertions, the Second Appellate District Court determined the SLO County Superior Court had jurisdiction over the appeal.

Deputy Attorney General Charles Lee petitioned the court to change their order, as Lastra was charged with a felony. In addition, in order to avoid conflicting results that could occur if the superior court hears the misdemeanor appeals while the appellate court rules on the felony appeal, Lee asked that all appeals related to Judge Guerrero’s ruling be heard in the appellate court.

On May 7, the Second Appellate District Court determined the appeal over Guerrero’s decision to recuse the entire district attorney’s office from prosecuting Lastra and his co-defendants Sam Grocott and Jerad Hill belongs in the appellate court.

In addition, if the San Luis Obispo County Superior Court does not transfer the appeals regarding Tianna Arata, Marcus Montgomery, Joshua Powell and Amman Asfaw to the higher court, the appellate court plans to entertain the petition to transfer those cases, according to Wednesday’s order.

In opposition to the defense, prosecutors argued against the disqualification, noting the defense is required to show an actual conflict of interest and not a perceived conflict.

Judge Guerrero then ruled that Dow had a clear conflict of interest based on the wording of an email he and and his wife sent to supporters seeking donations. The email asked supporters to help Dow lead the fight against the “wacky defund the police movement and anarchist groups that are trying to undermine the rule of law and public safety in our community.”

Regardless of whether the appellate court or three SLO County judges hear the appeals regarding Judge Guerrero’s ruling, after legal briefs are filed by both the prosecutors and the defense attorneys, oral arguments will be scheduled and held before any decision is published.