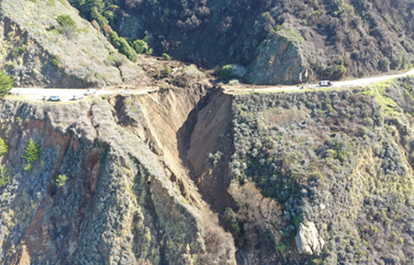 Aerial view shows the progress of fill construction looking up the Canyon at Rat Creek from early March.

Caltrans announced today it will reopen Highway 1 at Rat Creek near Big Sur by April 30 – nearly two months ahead of its target date. Debris flow from the Dolan Fire burn scar washed out a 150-foot section of roadway on Jan. 28, resulting in a full closure.

After assessing the damage, removing debris and making minor repairs, Caltrans began to reconnect the roadway at Rat Creek with an enhanced fill. Starting in late February, crews worked seven days a week during daylight hours to fill the canyon with compacted dirt to the road level. 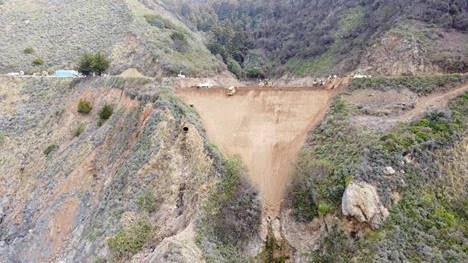 Aerial view shows the progress of fill construction looking up the Canyon at Rat Creek on March 26.

During the next two weeks, Caltrans will establish the base of a new road, to be followed by paving and striping.

“Reopening Highway 1 at Rat Creek just three months after a washout of this magnitude is great news for residents, recreationalists, business owners, and those who move goods through this region,” said Caltrans Director Toks Omishakin. “Caltrans has been focused on the emergency work needed to increase the resiliency of this highway section to extreme weather, and the fixes made will allow for safe travel.”

Following the reopening, Caltrans plans to install a redundant drainage system that will require intermittent traffic control at Rat Creek. Caltrans will also work on landscaping and installing permanent guardrails throughout the early summer.