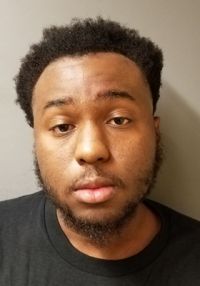 A Detroit, Michigan man who robbed CoastHill Credit Union in Lompoc and attempted to rob a bank in Guadalupe, prior to leading officers on a high-speed chase that ended at Vandenberg Air Force Base, has pleaded guilty in federal court to bank robbery.

On Oct. 13, 2020, Maurice Antwion Pilgrim Jr. entered the Lompoc CoastHills branch located at 1320 N. H Street and passed a note to the teller demanding money. The teller gave Pilgrim $3,000 in cash, and the robber walked out of the credit union.

Two days later, Pilgrim entered Mechanics Bank located at 905 Guadalupe Street and handed a note to a teller that said, “give me $5,000-$10,000 and no one gets hurt,” according to the United States Attorney’s Office for the Central District of California.

The teller refused Pilgrim’s demand. Pilgrim then took the note back and fled the scene after seeing a bank security guard nearby.

Pilgrim initially stopped his car, but refused to exit the vehicle and then sped away. A high-speed pursuit ensued.

During the chase, Pilgrim drove at speeds of more than 110 mph, weaving in and out of traffic and nearly colliding with other drivers.

Eventually, Pilgrim drove onto the Vandenberg Air Force Base property near the visitor center. He drove over a curb into a landscaped area, exited his car and fled by foot.

Deputies chased after Pilgrim and quickly caught him at the gates to the air base.

Investigators recovered $552 from Pilgrim’s car and $1,700 from his pockets, which were proceeds from his Lompoc robbery.

As part of a deal reached with prosecutors, Pilgrim pleaded guilty to one count of bank robbery. Pilgrim faces a maximum sentence of 20 years in federal prison. His sentencing hearing is scheduled for June 21.

The FBI investigated the case with help from the Santa Barbara Sheriff’s Office, as well as the Lompoc and Guadalupe police departments.