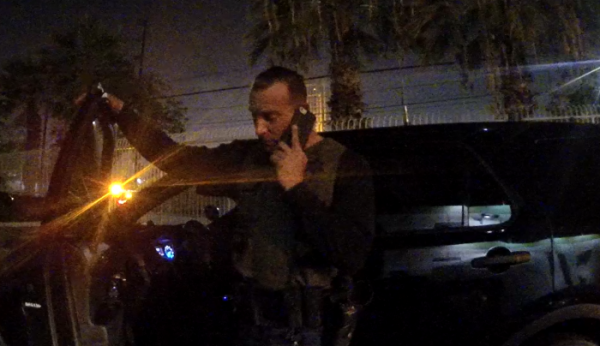 A former Los Angeles County Sheriff’s deputy was sentenced today to 84 months in federal prison for orchestrating and leading a $2 million armed robbery – staged as a legitimate law enforcement search – at a warehouse where more than half a ton of marijuana and over $600,000 in cash was stolen.

While sentencing Marc Antrim, 43, United States District Judge Virginia A. Phillips, said, “the seriousness of the crime could not be overstated.” The heist, which “sounded like a movie script,” was “tragic” for the victims and eroded “the public’s trust.”

During the early morning hours of Oct. 29, 2018, Antrim and his co-conspirators dressed as armed deputies with firearms and approached the warehouse in an LA Sheriff’s Department Ford Explorer. Upon arrival, Antrim flashed his badge and a fake search warrant to the security guards to gain entry to the warehouse.

One fake deputy also visibly carried a long gun to further intimidate the guards into submission.

At the beginning of the two-hour robbery, Antrim and his co-conspirators detained the three warehouse security guards in the cage of the LA Sheriff’s Department Ford Explorer. Soon after the guards were detained, a fourth man arrived at the warehouse in a large rental truck, and all four men began loading marijuana into the truck.

When Los Angeles Police Department officers legitimately responded to a call for service at the warehouse during the robbery, Antrim falsely told the officers that he was a narcotics deputy conducting a legitimate search.

To facilitate the sham, Antrim handed his phone to one of the officers so that the police officer could speak to someone on the phone claiming to be Antrim’s sheriff’s department sergeant. The individual on the phone was not Antrim’s sergeant, and Antrim did not have a legitimate search warrant for the warehouse.

After police officers left the warehouse, other co-conspirators arrived and the robbery continued, allowing the fake law enforcement crew to steal even more marijuana and two large safes containing over half a million dollars in cash.

At the time of the robbery, Antrim was a patrol deputy assigned to the Temple City station, but he was not on duty, was not assigned to the department’s narcotics unit, was not a detective, and would not have had a legitimate reason to search a marijuana distribution warehouse in the City of Los Angeles.

Prosecutors have secured six convictions in this case for the co-conspirators who took part in the raid alongside Antrim.

Christopher Myung Kim, 31, of Walnut, a disgruntled former warehouse employee, is serving a 14-year federal prison sentence after being found guilty by a jury for his role in planning the heist and making off with $1.5 million in stolen marijuana after the raid. Antrim testified at Kim’s trial, which the judge credited as a significant reason to reduce Antrim’s sentence.

This case was investigated by the Drug Enforcement Administration; the FBI; and the Bureau of Alcohol, Tobacco, Firearms and Explosives. LA Sheriff’s Department’s Internal Criminal Investigations Bureau provided substantial assistance to the federal investigation.