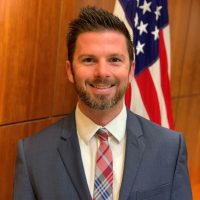 Fitzroy previously worked for SLO County, filling several planning department roles, the last of which was assistant director. Fitzroy left the county for his job in Arroyo Grande two months ago, following an accusation in a whistleblower complaint that he agreed to waive thousands of dollars in fees for a development project.

Prior to his work for the county, Fitzroy was employed by Rincon Consultants as a planning and environmental impact consultant.

LAFCO plans to pay Fitzroy $253,138 annually in salary and benefits, according to a LAFCO staff report.

Fitzroy graduated from Cal Poly San Luis Obispo with a bachelor’s degree and he also has masters in natural resource management and environmental planning and public policy.

If the commissioners vote to approve him, Fitzroy is expected to begin work as the LAFCO executive officer on May 24.