During the press conference, Dow said investigators think they know a location where Smart’s body may be. He did not specify the location.

Also, Dow said it is believed that Paul Flores’ dorm room was a crime scene, though he did not specify what is thought to have occurred there.

Investigators additionally believe Paul Flores has victimized other individuals, likely in Southern California. Paul Flores may have sexually assaulted victims in his community of San Pedro or elsewhere in the Los Angeles area.

Dow is asking anyone with information about criminal conduct committed by Paul Flores to contact San Luis Obispo County Crime Stoppers. He acknowledged Wednesday that no-body homicide cases are complicated and difficult.

“The story of Kristin Smart has touched us all,” Dow said. “Her story has filled us all with determination.”

Smart, a native of Stockton, was nearing the end of her freshman year at Cal Poly when she vanished on May 25, 1996, after attending an off-campus party. She was last seen near the intersection of Perimeter Road and Grand Avenue. Smart was headed to her dorm room, and Paul Flores, then a 19-year-old freshman walked home from the party with her. 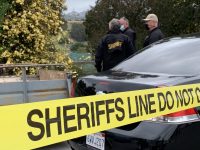 On Tuesday morning, after years of investigators amassing evidence and conducting interviews and searches, San Luis Obispo County Sheriff’s deputies arrested Paul Flores at his San Pedro home and Ruben Flores at his Arroyo Grande home. Detectives have been digging under Rubin Flores’ home in another attempt to find Smart’s body.

Later Tuesday, Parkinson said his detectives found evidence related to Smart’s murder at the homes of both Paul and Ruben Flores.

Paul and Ruben Flores are due in court at 8:30 a.m. Thursday for an arraignment hearing.

Paul Flores is being held in the SLO County Jail without bail. Ruben Flores’ bail is set at $250,000, though the district attorney’s office has indicated it will likely seek that a judge raise the amount.