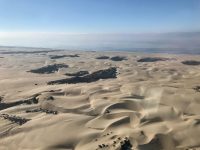 Friends of the Oceano Dunes accuses the California Coastal Commission of violating environmental laws and claiming to be a lead agency when it is not, in a lawsuit filed Monday challenging the commission’s authority to ban off-road vehicle riding at the Oceano Dunes over the next three years.

The suit disputes the commission’s finding that it has sovereignty over projects managed by California State Parks, a sister agency. State Parks is tasked with protecting the state’s natural and cultural resources, as well as creating opportunities for high-quality outdoor recreation.

Under the California Environmental Quality Act (CEQA), only the lead state agency has the principal responsibility to approve a project, according to the lawsuit. And when more than one public agency is involved, the agency tasked with creating and implementing a project is the lead agency, which there can be only one.

In late 2020, State Parks released a draft public works plan and a draft Environmental Impact Report of proposed changes to the Ocean Dunes State Recreational Area to the public and the Coastal Commission.

For nearly three years, the Coastal Commission led the public to believe that off-road vehicle use and camping would still be permitted at the Oceano Dunes and the existing park entrances would remain open. Then over the final 22 days of the process, the commission substituted prior plans with bans on off-roading and camping, as well as the closure of the Pier Avenue entrance, without holding any formal hearing on the matter, Friends of the Dunes argues.

“The Coastal Commissions “bait and switch” created great confusion among the public, other governmental entities and agencies, elected officials, and several of the Coastal Commissioners themselves,” according to the lawsuit. “State Parks, caught totally off guard, reacted like a deer in the headlights.”

Friends of the Oceano Dunes is a nonprofit that represents approximately 28,000 supporters of off-road recreation. The organization has successfully sued state and local government agencies, including the Coastal Commission, over past regulatory actions related to the Oceano Dunes State Recreational Area.

Jim Suty, president of Friends of the Oceano Dunes, told CalCoastNews this is the first of multiple lawsuits his organization plans to file regarding the Coastal Commission’s decision banning off-road vehicle usage. Because of limited time requirements, the nonprofit filed the CEQA suit prior to the other complaints.

Prior to the vote to phase out off-road riding, Thomas Roth, the San Francisco-based attorney for Friends of the Dunes, sent a letter accusing the Coastal Commission of bias, overstepping its legislative authority and violating due process.