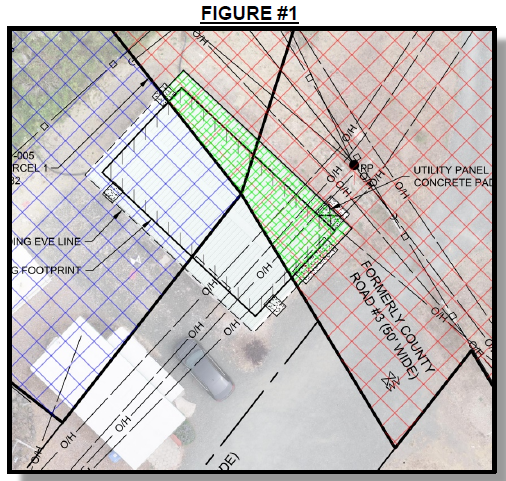 Survey: the green portion of the facility sets on the Hearst Ranch property

After posturing for more than a month, San Simeon Community Services District called for a special meeting on April 22 to approve a more than $17,000 payment it promised to pay the Hearst Corporation for allegedly encroaching on conservation easement land.

San Simeon CSD directors voted unanimously last October to approve an agreement with the owners of the Hearst Ranch, which allows a portion of the district’s water treatment plant to remain temporarily on the ranch, and to pay Hearst for a survey and legal work. A few months earlier, the survey determined the district built 560 square feet of a reverse osmosis facility on the Hearst Ranch Conservation Easement.

However, in early April, attorney Roy Ogden, who claimed to be working for an anonymous source, said a title search he conducted proves the facility does not encroach on Hearst land, in a letter he sent the district. A claim embraced by district staff and contested by its critics.

The board voted on April 8 to hire their own surveyor, in an attempt to prove their project does not encroach and to eliminate the $5,000 annual lease payment associated with the encroachment.

Even so, the district remained obligated to pay Hearst’s expenses.

On March 3, Hearst representative Kerry O’Toole responded to Ogden’s assertion with a list of demands.

“Hearst will not commence its review of the claims in the Ogden letter until SSCSD completes all of the following: (1) SSCSD reimburses Hearst $17,193.15 as outlined in the attached invoice in accordance with Sections 1 (e) and 2(d) of the Revocable Encroachment License Agreement effective October 26, 2020, which is due upon receipt of such invoice; and (2) SSCSD presents Hearst with its findings and supporting details pertaining to the purported accuracy of the claims in the Ogden letter.”

While Hearst and the district spar over property lines, the district is seeking to put water supply tanks on an uncontested portion of the Hearst Ranch property through an easement. The Hearst Corporation wants the encroachment issue resolved before reaching an agreement on the tanks. A delay that could cost the district a $500,000 grant, which requires proof of ownership or an easement.