San Simeon Community Services District General Manager Charles Grace and district legal counsel Jeff Minnery, with coaching from Chair Gwen Kellas, a prominent business owner in San Simeon and an unknown developer, are formally challenging Hearst’s ownership of the land they have been encroaching upon. This after years of the district concealing the encroachment.

As the saying goes, the best defense is an offense.

This is a match to watch. The scorecard will be kept in large legal fees. Hearst is presently ahead $54,000 to zero.

Come to think of it, Hearst cannot lose. San Simeon agreed to pay all of Hearst’s legal costs to fight the district. What a fun game for our disadvantaged community.

A bit of recent encroachment history

In 2016, the district built a portion of its reverse osmosis/desalination facility on Hearst property.

In Oct. 2020, Hearst demanded payments from San Simeon because of the encroachment. The district board authorized initial damage payments of $37,000 to cover the Hearst Corporation’s costs. In accordance with that agreement, Hearst proceeded to assemble a final encroachment easement agreement which they delivered to San Simeon General Manager Charles Grace on January 28.

District Chair Kellas and General Manager Grace suppressed that agreement for weeks going as far as violating the Public Records Act. During this time, mysteriously, a legal opinion from Ogden & Fricks LLP on behalf of an unknown client was sent to the district stating that there was no encroachment and that the district owns that land.

Grace then sends attorney Roy Ogden’s opinion to Hearst and to a SLO County staff person leading an investigation into an associated state grant that could be lost because of the encroachment.

Hearst quickly rejects the anonymous legal opinion. The county with no context provided can only scratch their heads.

If that was not enough, Grace subsequently receives a confidential letter penned by the local First American Title vice president, also from an undisclosed source.

Most interesting timing for these unknown source documents.

Grace oversaw the water treatment project and has a fair amount at stake here.

By the time of the April 22 special board meeting, a Hearst bill for $17,000 was past due. This was Hearst’s costs to create the long-term encroachment easement agreement. Hearst acted in good faith and created this agreement based on the October agreement signed by San Simeon.

The district had to approve payment of the $17,000 because Hearst would not enter into further discussions until this past due bill was paid. Under the same motion, the board decided to proceed with a survey and title search.

Hearst said they would only review a survey and documents created by the district. Unlike the district, Hearst would not give any credibility to the anonymous documents.

The board directed district legal counsel Jeff Minnery to work with Grace to proceed with a survey and to propose substantial changes to the Hearst Encroachment Easement Agreement. The district now wants any reference to an encroachment removed and more. They called it “soft redlines.” 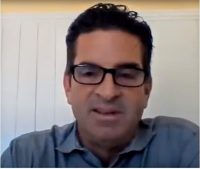 All they had to do and could still do is sign the Hearst Encroachment Easement Agreement, which was kept secret for weeks. That is what the district did agree to do in October, but is now reneging on.

Had the district acted in good faith, as Hearst did, and signed the agreement Hearst presented on January 28, this matter would have been over.

The Hearst encroachment and its handling has brought out the worst and fully exposed the dark side of San Simeon CSD’s governance. In my opinion, special anonymous for-profit interests have successfully influenced our community’s decision making.

Information was concealed from the public for weeks and Hearst put off while waiting for an “anonymously” funded and gifted legal opinion and a “confidential” letter. Such documents were given full credence because they aligned with certain parties’ business interests.

Hearst took the proper approach and rejected these documents out-of-hand as the directors General Manager Grace should have done.

What they have done is a bad decision for our community and one that smells even worse.